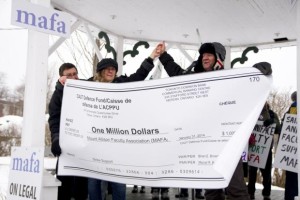 The strike fund of the Mount Allison Faculty Association (MAFA) received a substantial boost on Friday after receiving more than one million dollars in donations.

Hundreds of MAFA members, their families, students, community members and faculty association representatives from across the country marched around Mount Allison University on Friday at noon, wrapping up with a solidarity rally at the bandstand downtown.

At the rally, Brian Brown, President of the Canadian Association of University Teachers Defence Fund presented MAFA with a one million dollar cheque for their strike fund.

MAFA also received donations from faculty union representatives from across the country. They addressed the assembled demonstrators, issuing messages of support and solidarity on behalf of faculty associations from Manitoba to Nova Scotia. Most of the thirteen guests presented MAFA with cheques ranging from one thousand to ten thousand dollars.

The ‘flying pickets’ said they would return every Friday as long as the strike lasts, bringing more demonstrators and donations.

MAFA President Loralea Michaelis was grateful for the support. “It’s great. We know the war chest will hold out … as long as it needs to,” Michaelis told The Argosy.

MAFA has been on strike since Jan. 27 after last-minute negotiations over the weekend failed to produce a mutually acceptable collective agreement for the faculty and librarians at Mt. A.

“The university is the creation of professors, librarians, and students. It is for them. It belongs to them. Administrators must serve and support that creation, not dominate it and regulate it. If they try to dominate and regulate the university, we will relocate it to our strike headquarters,” Michaelis addressed the gathered crowd, prompting enthusiastic cheers.

Alexi Katsanis, one of several Mt. A students who attended the rally weighed in on the dispute in a conversation with The Argosy: “I believe that the faculty’s values are those of the students, and that it is important to fight for academic freedom and to ensure that the values of the academy and the university […] are maintained.”

Meanwhile, negotiations are at a standstill. The two parties have not met since Jan. 26, the day before MAFA’s midnight strike deadline.

Both the administration and MAFA maintain they are ready to resume negotiations at any time, but no further meetings have been scheduled. Both sides accuse the other of holding up a return to the bargaining table.

Mt. A Vice-President Academic Karen Grant told The Argosy that despite MAFA’s claims, she felt the administration and the faculty do not have competing visions for the future of the university. “I think that we have more in common than things that are sources of difference,” she said.