Council votes in favour of divesting from fossil fuels 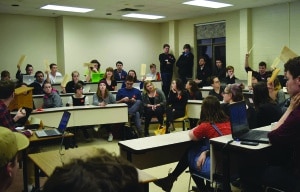 “This is probably the biggest crowd we’ve had all year,” said council chair Andrew Johnston as he called the meeting to order.

The motion called for divestment as a moral stance against the threat of climate change, its effects on billions of people in the Global South, and the fossil fuel industry perpetuating it. It concluded: “MASU calls for the divestment of the University endowment fund from the top 200 publicly traded fossil fuel companies over a five-year timeline, beginning with the halting of new investments made by these companies.”

Within 20 minutes, the motion was called to vote. It passed with 13 votes in favour, none against, and two abstentions from MASU President Dylan Wooley-Berry and and Board of Regents student representative Willa McCaffrey-Noviss.

Wooley-Berry said that he felt an ethical obligation to abstain given that his father’s pension “is invested alongside the endowment.

“[…] since this is a decision that could affect my family financially, I decided to abstain,” he said.

Before heading to Ducky’s to celebrate the outcome, executive members of DivestMTA expressed their relief and surprise outside of the council room.

“I was just surprised at how quickly that happened,” said Shannon Power, a second-year international relations student. “I guess I expected there to be more resistance to it. They seemed like they just wanted to get it over with, which is cool.”

MASU Council had voted against supporting divestment twice in two years, and many of the activists were expecting the same result.

Last year, only four councilors voted in support of the motion. This year, DivestMTA members said councillors had done their homework and consulted with students to a greater degree.

“I think they listened to the students a lot more this year,” said Gaby Steeves, a fourth-year international relations student. “They actually reached out to students instead of favouring the administration’s position.”

On Friday, April 1, a dozen members of DivestMTA also entered Centennial Hall to hand out a satirical article and “carbon bubbles” (balloons) to university administrators as part of a nation-wide set of actions called Fossil Fools Day.

Fossil Fools Day, which several student activist groups across Canada participated in, flipped the rhetoric of their cause by claiming they had “given up” and that “nothing matters.” This was intended to highlight the administration’s inaction and opposition to the idea of divesting.

“Ultimately we’re just trying to show the irony that our schools aren’t divesting,” said Steeves, who helped coordinate their action with other groups across the country.

Once the protesters discovered president Robert Campbell was not in his office, they decided to wait for him. When he arrived, protesters gave him the article and thanked him for teaching them the importance of apathy. Campbell said he appreciated them showing up. He also offered them cookies and posed for a picture.