Dealing with sexual assault on campus 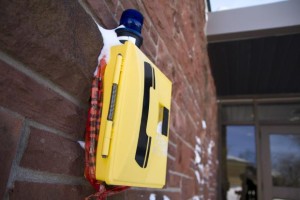 A recent CBC article revealed Mount Allison had 14 sexual assault complaints in the last five years and sparked a discussion in the Mt. A community about what that really means.

In response to the CBC article, which reported that Mt. A had the second- highest number of sexual assaults per capita, university vice-president Ron Byrne sent an email to students that said the report drew “unsubstantiated conclusions.” It also stated the article provided an opportunity to develop “the culture of respect and reporting that we have encouraged over the last decades.”

“A lot of people were upset with the interpretation of the report, especially with the email from the administration,” said Women’s and Gender Studies Society president, Katharyn Stevenson. “[They] chose to focus on the reporting culture of Mt. A. That report only said 14 were reported, but that begs the question of how many go unreported.”

Mt. A currently uses policies approved by the Board of Regents in 1994 and last officially reviewed in 1999.

“I need to just go in and change the policies to be reflective of current titles and current positions,” said vice- president student and international affairs, Ron Byrne. “I take significant responsibility for this,” said Byrne. “We need to move on this and we haven’t moved as quickly as we need to be.”

“Our first priority is education to try to never have one of these incidents happen,” Byrne said. “If any student feels that in their particular circumstance that we didn’t follow, or that somehow or other we didn’t take the steps necessary, then I would really strongly encourage them to come see me, come talk to me.” Melody Petlock, the university’s sexual harassment advisor, said people who have been sexually assaulted often want get any conversation around a assault out of the way as quickly as possible.

“Very, very often, they want to tell somebody, they want to deal with it and they want to get on,” said Petlock. “The vast majority of people who have experienced this do not want to keep living it over and over again for that long.”

The Mount Allison Students’ Union asked METRAC to audit campus safety in 2012. METRAC is a Toronto- based organization that works to end violence against women and youth across Canada.

The METRAC Safety & Security report was released in Sept. 23 and reviewed the university’s policies and procedures in many areas of student safety, including sexual assault. The report also provided recommendations for the university on how to improve campus safety and which university policies need updating.

In the recommendations section of the METRAC report, specific reference is made to Policy #1004, which is over 20 years old, regarding language and titles of authorities surrounding sexual assault cases within the university.

“It’s a big wake-up call for students as well as for the university. There are a number of changes that will be forthcoming from this audit,” said Melissa O’Rourke, former MASU president, at the time of the report’s release.

“Most policies appear as if they have not been reviewed recently,” the report

says. “The University should ensure that its policies and procedures are relevant and current by conducting regular policy reviews and updates every 3-5 years.”

The last documented revision of the Sexual Harassment and Sexual Assault procedures was on Sept. 21, 1999. On the first page of the document states there were “no substantive changes” at that time.

The report outlines the type of updates needed for Policy #1004: clearer language, updated gender- neutral language and details on the role of the Sexual Harassment Advisor in regards to sexual assault cases.

Under the emergency procedure in Policy #1004 dealing with Sexual Assault, it states: “In the case of a student who has been sexually assaulted, the incident should be reported to the Dean of Students.”

Despite the policy’s age, Mt. A may not be that different from other universities.

“I think that Mount Allison is not unusual in how it deals with sexual assault,” said Tasia Alexopoulos, a women’s and gender studies professor. “I don’t think that any university anywhere is doing enough to address sexual assault.” The university’s main resource for students who have been sexually assaulted is the Sexual Harassment and Assault Response and Education Service, or S.H.A.R.E., located in the Wellness Centre. The Sexual Harassment Advisor, Melody Petlock, has training in sexual harassment, assault, and other gender-targeted issues such as homophobia and transphobia.

S.H.A.R.E handles reports of sexual assault on a case-by-case basis.

“I see myself as a broker,” said Petlock. “If you come in here, I will let you know all your options.”

Petlock said options include medical assistance from the Wellness Centre and Sackville Memorial Hospital, informal and formal negotiations, counselling and formal complaints to the university.

“If a person wants to make a complaint of sexual assault, they write a letter,” said Petlock. This letter goes to the Director of Student Life, Gayle Churchill. “[Churchill] would instigate an investigation and procedure of determining what the outcome would be.”

Byrne or a delegate of his office usually performs the investigation.

Petlock said the investigation involves a series of separate interviews with the complainant, the alleged perpetrator, and any witnesses, as well as review of any evidence.

“The investigator can make a recommendation [on further proceedings],” said Petlock. The outcome is said to vary on a case-by- case basis. The Sexual Harassment and Sexual Assault policy, under penalties, states, “The penalty for a sexual assault may be expulsion.”

The Royal Canadian Mounted Police also serves as a resource for students who have been sexually assaulted. The RCMP assists victims with accessing medical care in Sackville and Moncton (if needed), and performs full investigations.

“Sexual offences are taken very seriously by police in all aspects,” said Corporal Patricia Levesque of the RCMP Sackville division.

“Truthfully, we’ve heard it all,” said Levesque. “Whatever the victim says is not going to shock us or we’re not going to be disgusted. We’re really there to help and be compassionate.”

Levesque outlined two different types of sexual assault cases as either recent occurrence of the events or an incident happening a long time ago.

“There is no statute of limitations with regards to indictable offences which is why you hear of sexual offences that happen 40 years ago and are being brought forward today.” If it is a recent event, their first priority is medical care.

“We actually end up going [to Moncton] quite often,” said Levesque.

When asked about the Sackville RCMP patrolling techniques, Levesque declined to answer. “It’s never good to let the bad guys know what you’re doing,” said Levesque. “If I were to give you all that information on how we do things, it would be to the advantage of someone who would be looking to commit a crime.”

Levesque does say that both patrolling and education are methods of preventive methods.

“The biggest thing I think that students can do to keep themselves safe is to have kind of a buddy system,” said Levesque.

No rape kits in Sackville

A person who is sexually assaulted must travel to Moncton to have evidence of the assault collected. Neither the Sackville Memorial Hospital nor Mount Allison’s Wellness centre can perform a sexual assault evidence collection kit. Commonly referred to as a rape kit, it is a medical examination performed to collect forensic evidence.

“You are going to get good medical care [in Sackville],” said Petlock. “If you want to have your evidence collected, we have a very good service in Moncton and it’s not that far away.” Petlock has offered transportation for students who are unable to get to Moncton, as has the RCMP.

A sexual assault evidence collection kit, more commonly referred to as a rape kit, is a medical examination performed to collect forensic evidence. The evidence collected with these kits can be crucial in obtaining a

conviction should the person who was sexually assaulted choose to press charges against the perpetrator. It involves an extensive procedure performed by a Sexual Assault Nurse Examiner, or SANE nurse.

Neither the Wellness Centre nor the Sackville Memorial Hospital has a SANE nurse on staff. Patients requesting a sexual assault examination are referred to Moncton. Although both Petlock and the Wellness Centre nurse, Cindy Crossman, have SANE training, neither can administer kits. The hospital declined to provide a spokesperson on behalf of the hospital to speak any further on this matter.

Petlock did not think that it was cost-effective to arrange for a trained SANE nurse to come to Mount Allison as a resource for students. “I don’t think for the cost, on so many levels, that it would get the use.”

Petlock said the hospital also did not see enough patient demand to justify a SANE nurse.

“It would be great to have it here,” said Petlock. “They tell me they don’t have enough reports to make that worthwhile.”

The Wellness Centre provides free STI and pregnancy tests with the possession of a Canadian provincial health card or insurance. A Plan B emergency contraceptive pill is available for $30 at the Wellness Centre, which is roughly $10 less expensive than what most would pay at a drugstore. The pill is most effective during the first 12 hours after sex, but can be taken up to 72 hours later.