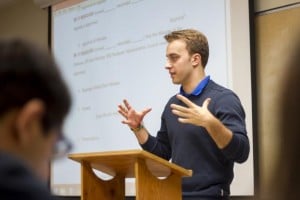 An error in the ballot setup, omitting the option for voters to abstain in the second round, made the results of the first election invalid. According to MASU bylaws, voting must be held under a preferential voting system, which entails that voters should be able to vote for one candidate and abstain from the other, abstain from both, or list candidates in order of preference. The Jan. 26-27 election allowed for students to list candidates in a preferential order but did not allow voting for a single candidate. Neither Wooley-Berry nor his opponent, Piper Riley Thompson, received the necessary 50 per cent plus one (vote) of the ballots cast during the first round of voting. The second round of voting could not be counted because the system did not let voters opt out from voting for a second candidate.

Because of the erroneous ballot, a second round of voting was held for the presidential election.The presidential runoff election followed a simple “yes/no/abstain” formula, with Wooley-Berry as the only candidate on the ballot.

“I am both relieved that the election is finally over, as it was much longer than anticipated,” said Wooley-Berry.

“I am excited that I can now begin to work with Heather [Webster] on transitioning into office and to being to work towards accomplishing all that the incoming executive set out to do.”

Voter turnout was at 38.9 per cent, according to an email sent by MASU president Heather Webster. Turnout was 12 per cent lower than during the earlier 2015 executive election. 63.03 per cent of voters voted “yes,” while 32.04 per cent voted “no,” and another 4.94 per cent abstained.

“I am very happy to see Wooley-Berry elected at last. This is a very exciting time for the students’ union. We can now move forward with transitioning,” said Webster.

For the first time in MASU’s history, a concrete transition plan has been drafted for the incoming executive, said Webster. “They will job shadow, read past reports, have meetings with members of the university community, attend sessions with experts in post-secondary education, and have sessions where they will bond and set goals as a team.”

“I believe that next year will be extremely productive and that students will see our union accomplish many goals and complete many projects,” said Wooley-Berry.