Exploring the importance of free press in NB 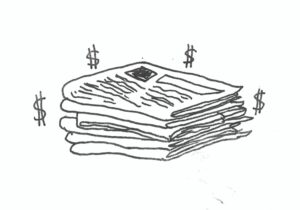 The State of Independent, Local Media in New Brunswick

You have probably seen the line “Mount Allison University’s Independent Student Newspaper” at the bottom of the front page of The Argosy. This statement, though seemingly benign and easily overshadowed by the lovely cover illustration, is incredibly important. Independent journalism and a free press are in many ways the backbone of a democratic society.  Independent media is free from the influence of government and other external sources such as that of corporations, or in the case of The Argosy, the university administration. For example, the opinions section of The Argosy provides a platform for any student to share their perspective, even if it is critical of the student union, university administration, or The Argosy itself.  The Argosy is entirely funded by student fees and is truly an independent student newspaper. Independent newsprint helps hold those in power accountable, allows for criticism and diversity of opinion, and ultimately gives the reader access to information that has not been sanitized or tainted by any outside authority. The Argosy, student newspapers, and independent small-town newspapers report on issues relevant to their readers, without the influence of external sources.

For a long time, all English-language daily newspapers in New Brunswick were owned by Brunswick News Inc. (BNI), a newspaper publishing company owned by the Irving family. The Irvings eventually acquired several other weekly community newspapers and ultimately had a monopoly over newsprint in the province. This led to obvious concerns regarding journalistic integrity and unfiltered reporting, with BNI criticized for not publishing articles critical of the Irving family’s businesses. In February of this year, BNI was sold to Postmedia, an Ontario-based corporation that owns over 130 brands including the National Post and Toronto Sun. Perhaps it was due to public scrutiny or maybe it came down to profits, but for whatever reason, Irving has officially exited the news media arena. Postmedia is the top corporate owner of community newspapers in Canada, holding the majority of community newspapers in Alberta and Ontario, from The Drayton Valley Western Review to The North Bay Nugget. While this move may be welcomed by those who oppose Irving and its monopolistic tendencies, there are others who argue this sale will be harmful for local journalism, with a massive out-of-province conglomerate now in control of most newspapers in New Brunswick.

Community-based journalism often suffers when media giants like Postmedia acquire small newspapers, with fears that Postmedia will not maintain all nine of the province’s English-language newspapers it purchased from BNI, including three daily and six weekly publications. This would not only result in job losses, it would also eliminate local perspectives and bring a more generalized regional perspective, especially if newspapers are amalgamated. It is no secret that print media is increasingly disappearing in favour of online publishing. As print newspapers in general are becoming more scarce and increasingly corporate-owned, there is incredible value to local, independent media. Be it community radio like CHMA FM, also funded entirely by student fees at Mt. A, or The Argosy, local media provides towns like Sackville with relevant, localized news. Social media does an excellent job at providing detail on global, national, and regional issues, but local newspapers and radio stations take the pulse of the community. Though local news can sometimes be seemingly boring, local newspapers help foster community and promote conversation. They also allow for people to see themselves reflected in media through sharing experiences and perspectives with those in their community.

Independent journalism, from national news broadcasts to small newspapers like The Argosy that you are reading now, is a key component of a healthy democratic society. We thank you for your continued support of Mount Allison University’s Independent Student Newspaper!