Finding housing when everything is more expensive than ever 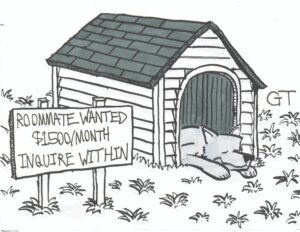 Discussing the challenges of living off campus and accessing affordable and adequate housing.

Sackville gains an influx of new students every year, and with each year, the incoming class seems to get larger. Yet, simultaneously, rent prices increase, and affordable and accessible housing availability decreases. This past July, tenants were evicted from an apartment building on King Street due to an investment group purchasing the building. One previous King Street resident said that they were given a thousand dollars to find other housing. However, they expressed that they didn’t want the money, and they wanted to continue to live in their apartment.

Alix Corwin, Mt. A’s orientation chair said that there are over 100 first-year students living off-campus this year. Some Mt. A students expressed that it is challenging living off campus and that it affects their studies.

Some off-campus students may feel disconnected from the Mt. A-Sackville community. For example, Ebrahim Arefi, who travels every day from Dieppe, stated that they are “away from everything, such as parties, friends, and events.”

Alicia Allen, a third-year student, recalls similar experiences and says, “it’s tough to find time to study if you’re always worried about how you’re getting to and from school and home.” Allen continued by talking about how expensive rent prices are in Sackville, and that “it is impossible to be a full-time student unless you have outside funding. So then you’re looking at juggling commutes, jobs, and schoolwork.”

The commute to campus is inconvenient for off-campus students and takes time away from their studies. Fourth-year student Arefi explained that he is done with classes at 4:30pm most days, and by the time he is done studying at the library, he doesn’t get home until 11pm. Some students feel as though they are forced to live off-campus due to housing being unaffordable.

Allen says that at one point in time, they commuted from Salisbury because they were not able to afford the dorms on campus.

Arefi added to this by saying that the rent costs of the apartments he viewed were around 600 dollars a month and some did not include wifi, power, or appliances. He continued by saying that many landlords in Sackville only want to rent to groups of people, and that finding a singular room is difficult.

“Sackville is a small town with limited resources. It’s not fair to have high rent in a city like this,” added Arefi.

Allen explained the difficulties around finding adequate housing in Sackville. They recounted how they viewed a place that needed many repairs and was covered in mold. “The owner was asking for 200 dollars more than listed on the MASU site, and they wanted people to have renter’s insurance too.” Arefi concluded that “housing prices increased by so much and there is not enough houses available for rent or purchase.”

Housing within the province is not only unaffordable, but rentals within student’s’ budgets are in poor condition.