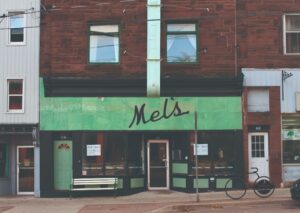 Sackville says a teary goodbye to the beloved restaurant and café

It is with great sadness that the era of Mel’s Tearoom has come to an end, as the owners announce its permanent closure.

Mel’s Tearoom was established in 1945, but in November 2018, Wendy and Dave Epworth bought the restaurant, not knowing that they would be its last owners. Since its opening, Mel’s has been loved by many and was considered a staple of Sackville. It came as a surprise, therefore, when the restaurant announced its closing; however, you don’t have to look far to see that the business had been struggling for a while.

Unbeknownst to the Epworths, on February 13, a post on the Mel’s Tearoom Facebook page was the beginning of the end. It explained that the café was closed due to incomplete repairs in their kitchen. According to an interview with Global News, the couple elaborated that the kitchen roof began to leak in February 2022. They added that “it leaked so badly that it collapsed the ceiling in the kitchen, which closed us completely.” In the interview, they also stated that they were $160K in debt due to the pandemic shutdowns, on top of the $120K that they had purchased the restaurant for.

On June 23, more tragic information was posted on the Facebook page. A screenshot of an email dated June 21 was sent to the Epworths declaring that the building the restaurant was in had been sold for $250K. The email stated that the couple had 48 hours to “respond with a legal non-conditional offer matching the price.” The caption stated that this made “the future of Mel’s very uncertain.”

It was an additional month until there was another post on July 28, 2022. This was unusual for the rather active page, which used to post frequently about daily updates and specials. The post mentioned that the restaurant would not be open to serve customers during SappyFest, an arts and music festival held annually in Sackville. The owners explained in the comments that they wished they could reopen, however, it was “not feasible.” They added that a new owner would be “perfectly feasible,” and that selling the restaurant was the only way to ensure its survival.

It was August 6 when fears were confirmed; Mel’s Tearoom had been put up for sale. A later post on September 1 explained that the couple “[did] not have the ability to pay rent” and that they “were very motivated to sell” before having to vacate at the end of September. Furthermore, it was recently posted on October 12 that the LED Mel’s Tearoom sign has been sold to Bill Steele, owner of the Dorchester Jail AirBNB.

Mel’s Tearoom Facebook page began to be flooded with comments of support, condolences, and so many heartwarming stories. One commentator mentioned that Mel’s is where they first met their partner, with whom they are now expecting a baby; another reminisced about sharing milkshakes with friends while studying at Mt. A. Another commented that they once forgot to pay for their meal, and when they returned the next day, they were “greeted with a smile, and a ‘don’t worry about it. We knew you’d be back.’” Among one of the most sentimental comments posted was “[Mel’s Tearoom will] always hold a special place in our hearts,” which represents the grief that many felt at the news of the gem’s closing.

“I am upset about it closing mostly because they had affordable pricing,” said student Alexis Malenko. “They did have good food and I really liked their milkshakes. The mint chocolate chip [milkshake] was definitely my favourite.” Malenko added that she hadn’t visited Mel’s Tearoom as often as she would have wanted to before it closed.

Malenko also mentioned that she liked how the restaurant’s atmosphere gave off a “retro vibe. […] They even had vinyls there and old booths, which was so cool. It was like a trip in the past,” the student commented. “[I can’t] say I’ve had a bad experience,” she concluded.

Another student, Violet Arana, also said that she always had a “great experience” at Mel’s Tearoom. “The very first time I went there it was very close to my birthday, and I went with my friends Alexis and Lauren,” Arana explained. “It was very, very nice. The food [was] great. The prices were great. Also, the servers were very kind and [were] always making sure we had everything so that was nice.” Arana mentioned that her favourite part about Mel’s was their milkshakes. “They’re so good and it’s a great portion. [They have] flavours that I have never seen before but work out very well.” Arana added that she was sad “the only [restaurant] that had that type of food is gone.”

Like Malenko, Arana also commented on the atmosphere of Mel’s Tearoom. “The restaurant gives me a vibe from The Chilling Adventures of Sabrina. The restaurant that she goes [to] with her friends [in the TV show] gives me the same energy.”

In addition, Arana mentioned it is “very unfortunate” that the iconic Mel’s Tearoom sign is going to be removed from the storefront. “It made the town a little more aesthetic.” The student noted that “if someone is buying it and they’re going to put it somewhere, I’m okay with that too. No one can keep things forever, right?”

Arana concluded that she hopes a new restaurant opens with the same type of food served at Mel’s Tearoom. “A milkshake place is definitely a must.”