Police budgets for the Codiac region increase by $5 million 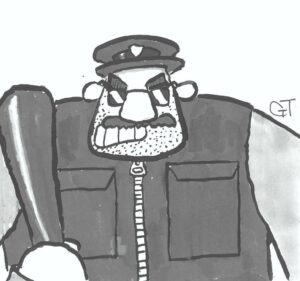 Discussing the ineffectiveness of increasing police budgets and police visibility in Sackville.

The Codiac Regional Policing budget will increase by $5 million this year, which will affect the areas of Moncton, Dieppe, and Riverview. The policing budget for the Codiac region now stands at $39 million a year. On October 13, the city of Riverview held a meeting regarding the town’s budget, where the funds for policing were reviewed.

“When we increase police budgets, we are increasing the possibility of violence against people who are already marginalized and already lacking in services and care,” says Dr. Ardath Whynacht, an author and a sociology professor at Mt. A.

Increasing police budgets is an ineffective approach in response to decreasing crime rates, says Dr. Whynacht. “We’re robbing ourselves of any ability to actually deal with the underlying issues, which is the housing, addictions, and mental healthcare crisis,” she says. Dr. Whynacht suggested that provincial funding should be put into these social services, rather than policing.

Not everyone disapproves of the increase. A woman named Kim Christie-Gallant has started a “Make Moncton Safe Again” movement that aims to increase policing budgets. In an interview with CTV, Christie-Gallant stated that she was concerned with the rise in crime and drug use surrounding the city’s homeless population.

“Folks who are unhoused facing unmet mental healthcare needs and addictions challenges are much more likely to be victimized both by police and by folks in their community than they are to perpetrate crimes,” explains Dr. Whynacht.

The police force is not equipped to address issues of houselessness or addiction. Dr. Whynacht explains how the police “pushes vulnerable people who need services and care further out of the public eye” and says that the city’s decision to increase its policing budget by five million dollars is an example of how services are unequally distributed within the province.

“We see a lack of care and listening to the organizations who actually are poised to be able to make a difference in the housing crisis and in combatting addictions in the community,” explains Dr. Whynacht.

Some residents of Sackville report increased visibility regarding policing in the community. Caitlin O’Rourke, a fourth-year Psychology and Sociology student at Mt. A, feels as though students are at risk of being over-policed. A few weeks ago, O’Rourke explained how the police shut down her house party before she had the chance. “Usually, they would just drive by and leave, I’ve never seen them get out of their vehicles and talk to us,” says O’Rourke.

Other students note that police presence at parties has increased this school year. The city of Halifax has not tolerated large outdoor gatherings, mostly hosted by students. Large gatherings of students are due to “a desire for community and recreation,” as stated by Dr. Whynacht.

Mt. A has limited options for socializing in large groups on campus or in residence, which leads to many people gathering off-campus and increases the risk of police encounters.

“Policing is racist, and for students who are moving to a rural New Brunswick community who are Black, Indigenous, or a person of color, they are more likely to be treated poorly by police,” says Dr. Whynacht.

Many are concerned that the decision to increase police budgets, which lead to increased visibility of police, are not productive as the police force is unable to provide services to vulnerable people. Dr. Whynacht says that they only increase “the possibility of violence against folks in the community who are already marginalized and are already lacking in services and care.”