Get to know the new university librarian 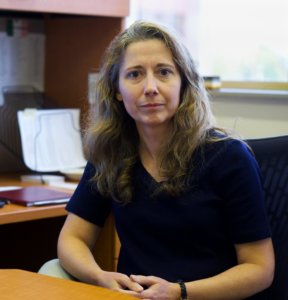 Dr. Dianne Keeping is settling into life at Mt. A and looking forward to the year ahead

On Aug. 7, Dr. Dianne Keeping began her position as the new university librarian at Mount Allison. The university librarian supervises operations in the R.P. Bell Library and Archives, as well as the Mt. A music library. Whoever is in the position oversees the work being done by librarians, library staff and library technicians.

“I’ve lived in larger centres for most of my adult life but I grew up in a very small town about the size of Sackville,” said Keeping. “So, in a way it’s a bit like coming home again.”

Keeping grew up in Newfoundland and went to university at Memorial University and then at Dalhousie in Nova Scotia. She completed a PhD in archeology in England where she studied skeletal remains of medieval nuns.

Keeping has worked in a hospital library, was a research consultant for the Newfoundland and Labrador government and was a cataloger and collection developer for the MUN library for 11 years. Before working at Mount Allison, Keeping worked at Mount Royal University in Calgary as collections manager.

Keeping remarked that the main difference between Mount Allison and other places she has worked before is the size: “Mount Allison is small but mighty. It’s a much smaller university than the others I have worked with. It’s interesting to come into a smaller environment. It’s all very compact and it has its unique ways of doing things. I like the small size; it’s quite nice.”

For the next five years, Keeping is expecting to be busy working on the library renovation project. She spoke about the committee formed last year called Vision 2025. “They were involved with creating a vision with a big wish list about what we would like to have if money was no object,” said Keeping. “Next phase will be striking another committee and we’ll be taking the “pie in the sky” wish list and bringing it down into more practical actions, wishes and dreams and looking at the physical space and seeing what has to happen.”

In order to do this, Keeping will focus on what “the basic functions we need in a library are, and how do you fit all of those wish-list items in around the space, and what is that going to look like.”

Keeping spoke about the social aspects of her job as well. “An important part of the university librarian’s role is outreach,” she said. “Engaging with other members of the campus community to let them know the library is here, this is what we do for you, this is how we contribute to the university environment and how we contribute to the student educational process.”

“My job is to guide, to process and keep everyone calm and collected, so that when you guys come in you just see that everything is operating smoothly. So we look calm on the top but underneath we’re [paddling] like ducks,” said Keeping, describing her day-to-day work. “It’s basically keeping things moving along, ensuring that our students have a place to go to study and to get the help they need. The important thing I want to get across to students is that we’re here to help you. And don’t be shy about coming and asking for any assistance.”