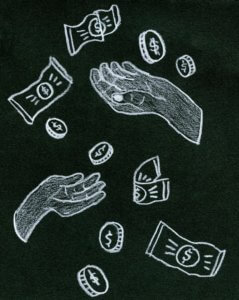 NBSA fighting for changes regarding recent cuts made to financial aid

In May of 2019, the provincial government cut several programs that assist students financially. These programs included the Free Tuition Program, Tuition Relief for the Middle Class and the Timely Completion Benefit, one of the only debt-relief programs in New Brunswick. To replace these programs, the government introduced the Renewed Tuition Bursary program along with tax credits.

“[The Renewed Tuition Bursary] cut funding from students, only making them eligible for up to $10,000,” said Ailish MacKenzie-Foley, a board director of the New Brunswick Student Alliance (NBSA) and vice-president education of the St. Thomas University Union. “The way [the New Brunswick government] justified it is that they’ve expanded the program, so now it’s available to those who are in private institutions as well,” said Emelyana Titarenko, president of MASU and the chair for the NBSA.

“We as a board found this unacceptable,” said MacKenzie-Foley. “Cuts to student financial aid are cuts to many students’ futures, as many will not be able to come back to school due to lack of funding.”

Titarenko also discussed the timing of this change, and how many students were unaware of the changes until they came back to school in September. “It happened at a time where students were off campus, and no one really knew that this was happening,” she said. “When students came back, they realized it when they received their assessments and student loan forms back.”

The NBSA is the largest student organization in New Brunswick, representing over 12,000 students. It is made up of student leaders from four universities: the University of New Brunswick (UNB) in Fredericton, UNB Saint John, St. Thomas University and Mount Allison University.

Every year, the NBSA travels to Fredericton to discuss matters with each school’s member of the legislative assembly (MLA) to advocate for students’ needs for that particular year.

The NBSA began the #DontCutOurFuture campaign with the goal of getting the government to invest more in up-front, non-repayable, needs-based grants, as well as creating a debt-relief program that is more accessible. “The Timely Completion Benefit was not that accessible,” said Titarenko. “If you had a debt over $32,000, [all the money] after that would be forgiven, but you still had to pay the $32,000.”

The NBSA highlighted their key points of reasoning behind the campaign. The first point was about the number of low-income students who were able to go to post-secondary because of the grants they had received in the past years. In 2017-18, over 6,300 students had their tuition fully covered. Another key point was that New Brunswick has the highest average student debt in all of Canada. New Brunswick students have an average of $35,200 in government debt when they graduate, whereas the national average for student government loan debt is around $22,300.

Another reason the NBSA started the #DontCutOurFuture campaign is because they argue that New Brunswick will face more outmigration if students have higher debts to pay once they graduate. According to Titarenko, outmigration is already a huge issue in New Brunswick.

“Students are just leaving after they graduate from New Brunswick schools,” she said. “One of the things that we talk about in our debt-relief program is ‘Why not give students an incentive or a reason to stay?’ ”

The NBSA also outlined what they want the new debt-relief program to look like in a letter that they presented to their MLAs.

“The biggest thing about this campaign was to really raise awareness to it and let the government know that students are being affected,” said Titarenko.

Students from universities in New Brunswick discussed the different ways that these changes have affected them personally.

“I didn’t receive enough funding for my first year of university through student loans,” said an anonymous Mt. A student in a testimony acquired by MASU and presented to the MLAs. “However, when I called and claimed that I wasn’t receiving enough and there must be a mistake, they said that I had more than enough accessible external funding and they weren’t able to loan anymore. It was ‘my fault’ I didn’t get more money in scholarships.”

“I was set to receive student-debt relief but it was cancelled just before I could,” said an anonymous student from UNB Fredericton. “I was a low-income student, and grew up in poverty from birth until 18 when I received my first student loan.”

“With barely enough money to stay in school, I’m now couch-surfing, studying full-time and working part-time, working with sports teams and working weekends at another job in my hometown two hours away just to make ends meet,” another student from UNB Fredericton testified.

Students are especially affected now that tuition in New Brunswick has increased. “All of the tuitions in New Brunswick went up this year, so most of them are above $8,000,” said Titarenko. With students now having to pay higher tuitions, the $3,000 that the Renewed Tuition Bursary offers barley covers any tuition.

The NBSA also wants to present the MLAs with pictures of the “Wall of Debt” on the Mt. A campus to show just how much money students are going to owe when they complete their post-secondary education. The Wall of Debt is located just before the main doors to enter the library.

Not only do these changes affect students who are already in university, but they could also have an impact on students who have not yet started their post-secondary education. “[Debt] is a huge thing that people stress about,” said Titarenko. “Knowing that if they go to university, [their debt will be high].”

Another thing to consider is the effects these cuts have on students who come from low-income families. Individuals who grew up in poverty or low-income families often choose not to attend university to avoid student debt. “It’s creating an additional barrier to education,” said Titarenko.

Titarenko explained that the next step for the campaign will be Advocacy Week in November. The NBSA will be meeting with MLAs to present their asks. The first ask is to reconsider the financial program cuts for university students in New Brunswick.

With Advocacy Week coming up next month, Titarenko talked about ways that students can get involved with this campaign. “We will be recruiting students who want to take part in it,” said Titarenko. “It’s happening during our [November] reading week, so it’s a great opportunity for students to get involved with it, and be right at the front lines advocating to those MLAs who are representing us.”

MacKenzie-Foley discussed how the NBSA’s main goals are in the best interests of the students. “Our first [goal] was to engage with our students (through mobilization). Another is to always keep students informed of these issues,” she explained. “Lastly, [our goal is] to speak out on behalf of our students to the government, having the government listen to our concerns surrounding student financial aid, and making a change instead of cutting more post-secondary education,” said MacKenzie-Foley.

The NBSA would like to see more financial contributions to the new post-secondary financial assistance programs in the province’s 2020 budget. “A huge [goal] would be [to see] that [the Renewed Tuition Bursary] has more investments into it, that it’s not $3,000 but maybe it’s back to $10,000,” said Titarenko. “Or even that it’s consistent with the amount of tuition that students have to pay.”

Titarenko ended the interview with a message to students that the NBSA is doing what they can to be the voices of those who are being affected. “Not only is [this] to show students that the NBSA is here for them and we’re here to advocate to the government, [it’s] also to show the government that the changes that you make have a huge impact and we want to be a part of the conversation.”

“To see New Brunswick as a province thrive, you first need to invest in the students,” said MacKenzie-Foley.