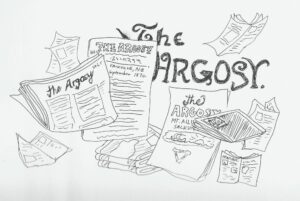 The developments to the student-run newspaper reflect our changing world

Mount Allison University’s independent student newspaper, The Argosy, is celebrating its 150th anniversary this year. Since its establishment in 1872, Mt. A. students have been reporting on highlights in news, arts, and culture, as well as writing other creative pieces. Considering that The Argosy is one of the oldest student publications in Canada, it is unique that we can take a trip into the past through our school’s very own student newspaper.

In contrast to how The Argosy operates now, in the early days of its publication, issues were published monthly instead of weekly. The 1876-1877 volume of The Argosy, which is the oldest volume of the paper available on the Mount Allison Library Archives website, consisted of 16 pages per month and was published from September 1876 to April 1877. Advertisements were sold to local businesses and were displayed on either the first or last pages of the paper, depending on the monthly issue. It cost $1.00 for a quarter column, $1.60 for a half column, and $3.00 for a full column.

Unlike The Argosy’s cover pages today, which display student artwork, the early editions of each paper contained a double-sided cover page including general information about the school and the newspaper itself. The 1876-1877 edition included the name of the school, the names of the professors, and the different degrees offered on the front page. Interestingly, Mt. A. was originally referred to as the Mount Allison Wesleyan College and Academics and included three different degree options. The programs listed on the front page include the familiar Bachelor of Science and Bachelor of Arts, as well as a Bachelor of Divinity, which focused on the study of theology. The College also included a male academy and a ladies’ academy.

The back of the cover page specifically provided information about The Argosy. The newspaper was published by “the Eurhetorian Society of Mount Allison Wesleyan College;” a fancy way of saying that The Argosy was managed by the school’s student population, as it is now. The paper itself was “printed on superior toned and tinted paper, and published at the extremely low price of fifty cents per collegiate year.” This was displayed on every monthly cover of The Argosy, suggesting that the staff took great pride in the quality of their printed work.

In a short 150 years, however, printing on paper has become less prevalent than it once was, with digitalization becoming a popular practice in the late 20th century. Currently, The Argosy is printed every other week, but all articles are uploaded online. One thing that I find particularly interesting about the publication of The Argosy in its early days compared to now is the debate between paper and digitalization. The description of the quality of printing paper is not something that you would see often today; instead, those descriptions would most likely be replaced by those about computers and programs. Since The Argosy is one of the oldest student publications in the country, it is a privilege that we can observe how society has changed through our small newspaper.

Furthermore, the 1876-1877 edition of The Argosy included a religious poem at the beginning of every monthly issue. In its early years, Mt. A. was a Wesleyan College, meaning that it was a religious school linked to Wesleyan Methodism. Wesleyans believe in one God, who is the Father, Son, and Holy Spirit. These poems were therefore fitting when Mount Allison was considered a Wesleyan College, but there is no longer a need to publish religious material in The Argosy or in any other public newspaper. With secularism becoming a widespread concept in the early 20th century, the publication of religious articles became less important compared to news articles, which were usually written about hot topics of concern.

Students wrote about more than just news in the early editions of The Argosy, however, creative submissions, such as poems and short stories, were much fewer and far between. The older editions of The Argosy contain more professional pieces; writing was more formal and subjects were scholarly. Although news has the same meaning as it did back then, arts and culture has greatly changed as society has changed. As society has progressed, there is less of a need to appear a certain way and more of an emphasis on expression. Now, our arts and culture reporters have the liberty of writing about whatever their hearts desire, whereas in the past, they may have been limited in some senses due to controversial topics.

Even as societal norms have changed and elements have been added and taken away from The Argosy, its core goal as an independent student newspaper has remained the same for 150 years. To quote the 1876 paper: “The objects of The Argosy are, as heretofore, to give expression to the views of the Students of Mount Allison on college questions, and to furnish subscribers with local and general college news.”

You can access the 1876-1894 and 1922-1928 editions of The Argosy on the Mount Allison University Libraries & Archives CAUL-CBUA Atlantic Islandora Repository Network.

The digestion of news over the past 150 years