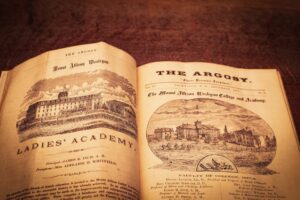 Delving Into Women’s Representation at Mt. A and in its Publications

There is no arguing that Mt. A has played a significant role in advancing women’s rights to an education. Grace Annie Lockhart was the first woman to receive a Bachelor’s degree in the British Commonwealth, awarded at Mt. A in 1875. Lockhart received a Bachelor of Science degree and was an activist after her graduation despite living a traditional life as a housewife to raise her three sons. Harriet Starr Stewart also shared a revolutionary feat at Mt. A by being the first woman to achieve a Bachelor of Arts in the British Empire and the first woman to receive a Master of Arts at Mt. A in 1882 and 1885, respectively.

These feats marked a movement for many women to obtain Bachelor’s degrees which continues to be on the rise. Statistics Canada reported in 2019 that 56.5% of all people enrolled in postsecondary institutions across the country are women (although women still make up a minority number in STEM fields). Many other countries in the West report similar statistics of women’s dominating presence in universities.

These achievements at Mt. A made the writers of The Argosy curious about the role of women in student journalism. Who were the women of The Argosy?

The role of women at The Argosy was limited, especially during the first 50 years of its publication. The original Argosy publications were few every year and did not often involve women in its creation. According to Mt. A’s university archives, the publication was initially “very much about published essays and a bit of local information.”

The Mount Allison Ladies’ College opened in 1854, catalyzing opportunities for women to achieve a formal education comparable to men’s at the Mount Allison Wesleyan College. Although many of the courses at the Ladies’ College originally focused on homemaking skills, there began a gradual expansion to educate women at the College on science and literature, like the education of their male counterparts.

The Argosy had shown both support and pushback for women’s right to an education around this time. In 1877, an article referencing a publication from National Teacher’s Weekly suggested that education spoiled women’s success as a housewife:  “she is puzzling her brain and destroying her beauty […] The charm of an educated woman does not consist in her accurate knowledge of Greek.”

After Harriet Stewart’s graduation in 1884, however, there was a note of pride written in the pages of The Argosy despite confusion as to what a woman would do with a formal degree. Stewart’s graduate biography states that “Whatever Canadian colleges may outstrip ours in producing famous graduates, none shall win from Mt. Allison the honor of having trained the first lady B.A., and none shall win from Miss Stewart the honor of being that B.A.”

Harriet Scammell Olive is a figure to note in the history of The Argosy. Olive was the first female editor at The Argosy in the 1893-1894 school year and became the first female valedictorian at Mt. A by achieving the highest grades in her class. Olive’s impressive accomplishments marked a new stage of The Argosy, where women had the opportunity to contribute to journalism on campus in a way equivalent to their male peers.

The Ladies’ College also had a small feature in The Argosy, being at the time a monthly publication, where they would include “Ladies College Notes” to update the community on relevant happenings at the school. However, this was not enough for the women, and they decided to create their own publication.

The Allisonia, founded in 1903, was the Mount Allison Ladies’ College magazine, and included a variety of publications relevant to their community. This magazine—founded and published by the Ladies’ College Eclectic Society—reported on local and campus news, featured members of the College, and gave individuals the opportunity to share their creative writing and flex their literary skills. This publication gave women the opportunity to practice journalistic skills while also contributing to the monthly publication of The Argosy at the men’s college.

In May 1914, however, there was an announcement made in the Allisonia stating that there would be an amalgamation of itself and The Argosy. Allisonia editor Hilda M. Allen noted that “co-operation must always mean added strength” to ensure a “bigger and better quality than either of the two papers published separately.”

This choice extended past simply improving the quality of the newspaper. The amalgamation was accomplished at the onset of the first World War, as men were being recruited as soldiers to travel overseas and not present at Mt. A to run the paper. Women were therefore essential in keeping The Argosy alive during this time, and without their work, the newspaper would have likely ceased to exist.

The school’s yearbook is also a student-run publication of interest. Despite its launch for the Class of 1930, the first woman to serve as editor-in-chief for the yearbook was Elanor (Fraser) O’Brien for the class of 1943. O’Brien also worked at The Argosy on the news staff for two years during her time at Mt. A. At this time in The Argosy’s history, it was more common for women to play a role in student journalism on campus.

Women have continuously shown that the path to equality is a winding and difficult one; many of them have had to pave the way to education for themselves as well as for future women. Mt. A has played a significant role in this, and The Argosy is both a sight and a source of these achievements. Despite the initial mixed responses to their role in academia, women have come to be an essential part of scholarship and journalism alike. Whatever Mt. A women intend to pursue in the future, though, I have faith it will live up to the remarks of the December 1893 issue of The Argosy: “The ladies of Mt. A are always noted as being successful in whatever they undertake.”

The digestion of news over the past 150 years