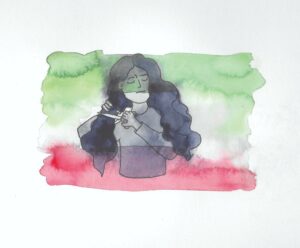 Across Canada this past weekend, from Charlottetown to Vancouver, rallies were held in solidarity with the people of Iran, whose protests against the theocratic regime entered a sixth week. Protests broke out across the Islamic Republic of Iran following the death of 22-year-old Mahsa Amini in the custody of the so-called morality police on September 16. Amini was arrested for not wearing her hijab or headscarf properly, an offence that violates Iran’s strict dress code and is punishable by imprisonment, fines, or flogging. While the government insists Amini died of a heart attack, her family believes she was tortured and beaten by morality police, fell into a coma, and died in a Tehran hospital, three days after she was detained. Her death has sparked the largest, most significant protests the country has seen in over a decade, with compelling scenes of women cutting their hair and burning their hijabs in protest reaching a global audience despite the regime’s attempted crackdown on internet access. Many protesters chanted “women, life, freedom.”

Though the protests were triggered by the death of Amini and have been centred around the extremely restrictive policies and practices of the regime regarding women specifically, there is a foundation of economic, political, and social grievances behind them. In many ways, these protests have been over 40 years in the making, since the 1979 revolution and the subsequent establishment of the Islamic Republic of Iran resulted in a crackdown on women’s rights.  Dr. James Devine, an associate professor in Mt. A’s Politics and International Relations Department, is an expert on Iranian politics and foreign policy in the Middle East. He graciously provided his perspective on the protests, indicating that there is certainly a shift going on in the country, however, an imminent collapse of the regime in Iran is unlikely. The gendered dynamic of the protests has complicated the regime’s response; as Dr. Devine notes, “using brute force against women has more of an impact on regime legitimacy than using force against predominantly male protests.”

The anti-government demonstrations have seemingly no end in sight, with young people, especially women, continuing to bravely defy the crackdown by security forces and continuing to organize and gather in protest across the country. Human rights groups estimate over 200 people have been killed thus far during the protests, though Dr. Devine notes that the regime is likely willing to use more force if necessary. Politicians and clerics, usually united against the people, are divided on this issue. Some conservatives have been critical of the government crackdown while others recognize that if the regime makes any concessions, it risks appearing weak. It is evident that these protests have caused great upheaval in Iranian society and could exacerbate divides between clerics and politicians, potentially undermining the regime. Iranian officials have blamed the protests on foreign intervention, a common tactic used by the regime to shirk responsibility. Dr. Devine noted that Canada needs to be cautious in its response, condemning the violence and introducing targeted sanctions, but avoiding becoming too involved as this would “[make] it easier for them to mobilize support amongst their base,” though he says their base seems to be getting smaller.

Dr. Devine said that the situation will impact the likelihood of the Joint Comprehensive Plan of Action, also known as the Iran nuclear deal, being negotiated and reaching a resolution. Further, he highlighted that the Iranian “regime will also move closer to Russia as their relationship with the West deteriorates further.” Ultimately, it is clear that the events in Iran will have profound consequences on the lives of its citizens and the stability of the regime and region moving forward. Strikes have begun in the country in support of the protests and further driving home the state of unrest in Iran, people are clearly fed up and desiring radical change. The question is, how long can these protests be sustained and what will the outcome be?