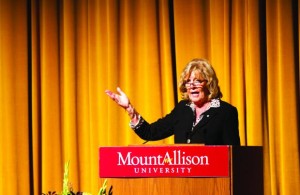 The Walrus Talks’ debut in New Brunswick challenged the static view of conversation. Expressing the perspective they held on the art of dialogue, a series of female speakers left the impression that there is no one perfect method of approaching “the art of conversation.”

The group of speakers brought a breadth of experience, which has become a staple of Walrus Talks. The line-up included authors, historians, an RCMP officer, a biographer, a performing artist and a rocket scientist. Each called upon her unique experience and background to discuss the art of conversation, finding common ground, the art of the interview, and much more.

Each of the speakers presented methods for approach conversation that they have cultivated through their own experiences. Aritha van Herk, an author and historian, emphasized the need for deceleration of modern communication, to use pauses and when one begins to talk, make every word count. Marlene Snowman, an RCMP superintendent, exalted the role of social media in accelerating the spread of critical information,  how this role can be of great help in fighting crime and keeping the public safe.

The speakers each had seven minutes to relate their ideas and interpretation of communication to the audience. Some speakers employed humor, a few were serious, some solemn, others boisterous, but all were insightful.  By the end of their monologues, the audience had gained a greater appreciation of what it means to communicate, as well as the implications and impact of human communication. All of these qualities were represented in the ideas of each speaker, from author Lisa Moore’s repetition of her mother’s advice, “remember who you are,” to Canadian soprano, Measha Brueggergosman, reflecting on the value of each individual’s inner dialogue.

The Walrus Talks: The Art of Conversation constituted a series of firsts for the conversational phenomenon rising out of the creative works of the Walrus Foundation. The event was the first of its kind to be hosted in New Brunswick. As well, the series of speakers was made up entirely of women for the first time. It tied in nicely with the conference “Discourse and Dynamics: Canadian Women As Public Intellectuals,” which followed over the next few days.