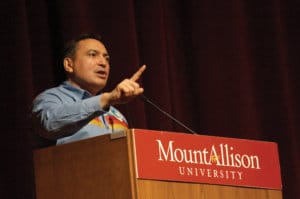 On Wednesday, Nov. 22 in Convocation Hall, Mount Allison welcomed National Chief  of the Assembly of First Nations Perry Bellegarde to campus. As the third speaker in this year’s President’s Speaker Series on Indigenous Action, Chief Bellegarde shared a powerful speech on reconciliation, Indigenous rights and the role our community has in achieving justice for Indigenous communities.

A strong theme throughout Bellegarde’s speech was the necessity of peaceful coexistence and mutual respect between settlers and Indigenous peoples. Bellegarde shared statistics from the United Nations Human Development Index (HDI), which lists Canada as 10th worldwide for human rights, but 63rd for the human rights of our Indigenous population. Bellegarde used this to emphasize the fact that Canadians and Indigenous communities are not “mutually benefitting from shared resource wealth.” Bellegarde stated, “Nations make treaties; treaties do not make nations,” but stressed that treaty relationships predicated on peaceful coexistence and mutual respect are still necessary for the mutual prosperity of both groups of people.

Bellegarde also spoke in great detail on the intergenerational trauma that has resulted from the Indian Act and the residential school system. Despite the topic, every word he spoke was outlined with hopeful optimism. Bellegarde shared his belief that understanding the impacts of the colonial oppression of the Indian Act and the cultural genocide of the residential school system plays an important part in the process of reconciliation. He said, “Reconciliation will not happen without understanding,” and went on to state that education and awareness are integral steps to reaching the understanding necessary to reconcile this intergenerational trauma. Learning about these processes of oppression is key in moving forward.

Emphasis was also placed on the necessity of language revitalization and retention. “Language is so fundamentally important to our survival as First Nations people because it’s linked to our ceremonies and our culture,” said Bellegarde. “Our language is our identity, it’s who we are.” Bellegarde proposed the introduction of traditional Indigenous language curriculum in public schools, as an integral step in undoing the “deliberate erosion of language and cultures,” and recognizing the cultural value of Canada’s many Indigenous nations and tribes.

Fourth-year environmental science student Caeleigh Marshall was one of the many guests in attendance. She described the talk as uplifting, inspiring and practical. When asked how she thought Bellegarde’s words could be translated into action by the Mt. A community, Marshall’s main suggestions were Indigenous faculty hirings and community integration. She said, “There’s lots of separation, and people don’t know each other very well,” proposing a need for more connection between settlers and Indigenous communities on campus.

Addressing the heart of the question of integration, Bellegarde ended his speech with the following.

“We may not be celebrating it, but we’re going to participate. Because we want to show that in spite of the genocide of the residential schools, and in spite of the colonization and oppression of the Indian Act — in spite of all those dreadful things, we’re still here as First Nations people, and we’re getting stronger. Our young people are getting more proud, they’re starting to speak their languages and starting to feel good about who they are. We still have our ceremonies. That’s what we’re going to celebrate. That we’re still here. And it’s more important now to learn from that 150 years, but it’s the next 150 years that matter. We’re not going anywhere, and neither are you. We’re in this together, so its your children and my children and my grandchildren and your grandchildren that are going to write the next story of our Canada, our next 150 years, our next chapter — and that’s going to be the best story because it’s going to be built on reconciliation and built on respect and built on the rights of our nation, because we’re not integrating anymore and being ashamed of who we are. We’re proud. We’re starting to get that pride back. That intergenerational wellness is starting to happen. We see that hope, we see that light. It’s a beautiful light.”