No quorum no problem 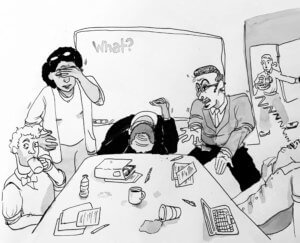 On Oct. 24, faculty council met to address academic issues. There were not 25 faculty members present, which meant that quorum was not achieved and no motions could be passed. However, constructive discussion still took place. Around 10 students, including members of Divest MTA, were also present.

The meeting opened with Jeff Ollerhead, provost and vice-president of academic and research, and Elizabeth Wells, professor and dean of arts, discussing future teacher training. Wells mentioned that, this year, department heads had only received two months training after they had commenced their duties, which she deemed insufficient.

After this, the conversation turned to the topic of freedom of expression. Ollerhead brought up the potential need for an official statement, as “eventually something will happen.… [We] don’t want to deal with [the] aftermath,” he said. “This is just a starting point; this is what other schools are doing.”

Robert Hiscock, director of marketing and communications, had drafted an example statement, based off of other universities’, regarding expression of freedom. This was distributed as a possible version. Professor Patricia Kelly Spurles, head of the anthropology department, spoke out immediately, saying that any statement made would seem more like a limitation of expression than a freedom. She expressed her preference for deference to the Charter of Rights and Freedoms instead of creating a university statement.

Associate professor Loralea Michaelis was quick to agree with Kelly Spurles. “[The drafted example is] very broad, very general, very open to interpretation,” she said, explaining her distaste for the model provided. She expressed her fear that this would be developed into further policy, which Ollerhead was quick to correct by clarifying that there was no intention of creating a policy, just a statement.

Discussion then developed concerning what was necessary to include in a statement. Some faculty members were in support of creating one, but there was heated debate as to why it was important. As more comments were made, Michaelis again presented her discomfort with the idea. “The more detailed a statement becomes, the devil starts to rear its head in [interpretation],” she explained.

Professor James Devine, head of politics and international relations, agreed and expressed concern that a statement would shape behaviour and potentially lead to the creation of a form of policy. To him, this could be nothing but problematic.

At this time, Kelly Spurles acknowledged the Divest presence in the room. In faculty council meetings, students are not permitted to speak. She specifically noted that no matter what the University does, they should be providing a “resounding endorsement of freedom of student expression,” clearly in reference to recent Divest actions, the kind of student activism that could be impacted by a potential policy change or statement.

Ollerhead agreed with this point, saying that we should have freedom of speech, experience and inquiry, an example being the hanging red dresses on campus.

Michaelis then changed the direction of the conversation, speaking on the importance of media training over that of an official statement. “It’s something that you should know how to do,” she said to Ollerhead. “That’s why you get the big bucks.” This comment was met with laughter by many, albeit reservedly from Ollerhead.

Eventually a straw poll made clear that there was no need for a statement of policy to be made at this time, and Ollerhead said that “maybe what we need is an educational discussion [moving forward].”

The meeting continued on a more lighthearted note as general announcements were made, including Kelly Spurles mentioning a personal art project and Kim Meade remarking that the REDress Project was taking place the following day.

The meeting ended in uproarious laughter as it was announced that a young male pet rat named Mango had gone missing on campus and was likely in or around the library, as he had escaped from a student’s pocket while they were studying there.