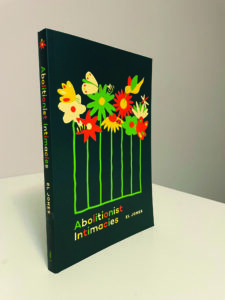 El Jones, an award-winning activist, scholar, and poet, was invited to campus on November 23 as part of the President’s Speakers Series. The Crabtree auditorium was bustling with students, staff, faculty, and community members adamant about absorbing Jones’ work and perspective as a long-time advocate for abolition.

The presentation revolved around Jones’ new book, Abolitionist Intimacies, describing how various carceral spaces force close proximity or forced intimacy. The book explores these spaces through different forms of writing: journalism, poetry, spoken word, and critical academic essays. Jones’ performance of her spoken word poems and book excerpts provided a clear image of the impacts of forced intimacy and the impacts of incarceration.

Abolitionist Intimacies documents the lived experiences of people within carceral spaces and how these are reflective of an oppressive, unequal, exploitative society that profits off of the detention of underprivileged groups, namely BIPOC, people with disabilities and mental illnesses, women, and the LGBTQ+ community.

Jones spoke intently on the racialization of incarceration, and this theme threaded through each of the works she presented to the audience. She explained that the abundance of media saying police are good, that they keep “us” (the white population and property) safe, and that only bad people are in prison feeds into racialized stereotypes that are upheld by biases and colonial practices.

To Jones, racism is a prominent facilitator of incarceration, one which Canada remains silent on. “Everyone in Canada is so nice, and let’s not mention the Shelbourne race riots, or cross burnings or Africville, or 2000 missing and murdered Indigenous women, but there’s no genocide,” she proclaimed in one of her poems titled “Canada Is So Polite.”

“Our pleasures are built on other people’s suffering,” Jones said, further describing how comforts and privileges that white Western populations experience in modern society are built from the exploitation and subjugation of racist, colonial, and patriarchal systems. These exploitative features of society have shifted and expanded to adapt to everyday life in direct and indirect carceral spaces.

Jones explained that these carceral spaces expand past prisons. Surveillance and control extend into the everyday institutions the world is so heavily dependent on for safety and security, like schools, hospitals, and social work and services. According to Jones, these different systems target various populations that are not always directly impacted by other oppressive systems like prisons.

During the question period, one audience member asked how  abolition can be made a reality. Jones herself recognized the difficulty of this task. She noted that mobilizing community involvement in this process is critical, rather than letting a select few members of society decide how the world should be shaped for everyone.

Defunding surveillance and policing services is a major element to abolitionist movements, and Jones explained how a community approach is crucial to bring it to fruition. Abolition looks different in every community, and having a holistic approach that involves the voices of the public ensures that it is pursued in the interest of everyone.

Abolitionist practices cannot happen overnight, given that incarceration is so ingrained in society’s institutions, ideologies, and practices. “Hold your vision of defunding and then chip away at it,” said Jones, referring to the slow but important process of abolitionist movements.

Jones also showed public support for various initiatives on campus. She endorsed Divest Mt. A with passion and invited student Kevinique Stubbs to speak on the Kavana Wa Kilele fund. The fund was established in honour of alumna Kavana Wa Kilele, an international relations student from Kenya who was a kind and passionate advocate during her time at Mt. A. The bursary is meant to continue to support a Black student who demonstrates Wa Kilele’s spirit. Donations to the fund can be made on Mt. A’s website at mta.ca/donate.

Jones’ book, Abolitionist Intimacies, is available online from Fernwood Publishing and in Sackville from Tidewater Books.