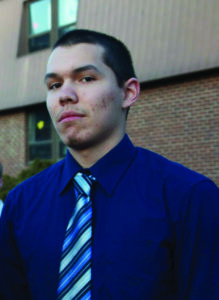 The search continues for Chris Metallic, a twenty-year-old Mt. A student who went missing on November 25, 2012.

“Chris was a great person. He loved his family,” said his mom, Mandy Metallic. She described Chris as a person who “liked to have fun, play basketball, video games, and collect DVDs, especially Marvel and DC comic movies.”

“If he could put an end to this unbearable pain I am in, he would,” added Metallic.

Chris is an Indigenous man from Listuguj, Quebec. Statistics illustrate that Indigenous people are 4.5 times more likely than non-Indigenous people to go missing in Canada, making them heavily over-represented in missing persons cases. Despite “the RCMP going above and beyond to help find Chris in the first few years,” Metallic explained that she “hasn’t heard much of them in the past four to five years.” She wishes that “there was more communication between [herself] and the investigators.”

Metallic explained that she is grateful for the support from the Sackville and Mt. A community. “The support from the community has been amazing,” she commented. Mt. A class of 2014, the year Chris was supposed to graduate, had placed a wreath on a tree commemorating him.

To honour Chris, the Indigenous Student Support Group (ISSG) hosted a sweat ceremony on November 24 and a sacred fire on November 25. New billboards of Chris have been placed on routes 940 and 935. The billboard off of exit 504 was replaced and can now be seen surrounded by turquoise, garnet, and gold ribbons beside an ‘Every Child Matters’ flag.

The turquoise ribbons represent hope, and “the garnet and gold are for Mt. A,” explained Amber Solomon, the president of the ISSG.

Metallic recalled her fondest memory of Chris. It was prom night and Chris asked to have a few friends over but “I think the whole school showed up that night,” she said. He felt so proud that he “kept hugging me and introducing me to his friends saying: This is my mom!”

Chris has still not been found, leaving his family and friends unable to find closure. “It is a struggle to keep his disappearance out there so that he is not forgotten,” said Metallic.