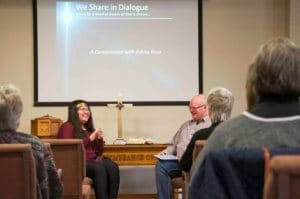 On the last Sunday of every month, Sackville United Church holds a “Conversation Café” halfway through their 11 a.m. service, inviting a special guest to “help extend the experience of welcome and community” at the parish.

This past Sunday, the special guest was Ashley Rose Cummings, an Inuit activist originally from Nunavut who is currently in her second year at Mount Allison.

Walking into the church hall, the room buzzed with warm welcomes for every newcomer and affectionate greetings for familiar faces. As Cummings went upstairs with the children at the beginning of the service, Rev. Lloyd Bruce began announcements, which included the decision to discontinue the tradition of passing around a collection plate to avoid alienating those who have nothing to give and not acknowledging those who give donations other than money.

Halfway through the service, Cummings returned, and Lloyd sat down with her at the front of the room for a short question-and-answer session in the interest of creating “dialogue that leads, for this community, to service in the world.”

Lloyd began by asking Cummings to tell the congregation about something she used to do as a child that brought her joy, and then moved into questions like “When did you first become aware that your experience as an Inuit woman would be different than that of others?” Cummings responded to the latter by telling a story about moving from Nunavut to Nova Scotia as a young girl, where she encountered verbal racism from other children and was blamed for responding in frustration.

Cummings also told a story about a woman named Sedna (or, in Cummings’ region, Nuliajuk) who was very independent and resisted her father’s demand that she be married. Her father did not respect her wishes and took her out on an umiak (a large boat) to ask her one last time. Sedna refused and her father became so angry that he threw her off the boat. When she hung on by her fingers, he cut them off. When Sedna fell into the sea she became the sea and her fingers became its animals, like the seal, narwhal and fish that provide for the Northern people. Cummings said that she recognizes Sedna’s determined and independent spirit in herself and wants kids to be able to look up to her in the same way as an advocate for Inuit rights: “I want kids to be able to see me and go, ‘I wanna be like her.’ ”

When sharing memories of her hometown Pangnirtung, Cummings teared up, saying, “That landscape, a lot of people see it as barren and bleak, but when you know the land and you know where you come from, you know it is so abundant in so many things.”

When Lloyd asked Cummings what her hope for the future of her community was, she answered, “Suicides happen so often among Inuit and it’s just a constant reminder of the difficulties that exist in our communities because of intergenerational trauma and colonization, and I just want to see more resources available to people who feel like they want to get out. That is starting to develop more and mental health is a larger conversation in Nunavut now – last year, for the first time in 17 years, there were no suicides in my hometown.”

Lloyd closed the question period by asking Cummings what people who benefit from white colonist-settler privilege can do to help. “Something that anyone can do, regardless of race or culture, is just to listen to other people. Dialogue allows for understanding amongst everyone – your world gets a bit bigger.”

Lloyd then asked the congregation to divide into small groups and discuss how Cummings’ stories challenged and expanded their knowledge and what they will “take with them on the journey toward reconciliation.”

When the congregation came back together, Lloyd asked if anyone had anything to share from their discussions. There were many volunteers.

One parishioner said she was thankful that Indigenous people are “still willing to communicate with us after so many years of hurt and trauma.”

Another told Cummings, “We were filled with admiration that you came here.… there is no doubt that you are going to be a person that people listen to.”

One woman holding her young child said she wished her older daughter had been there that day. “I want her to grow up to be a strong woman like [Cummings], to be able to be herself,” she said.

Their Sunday worship service closed with the congregation singing the hymnal refrain “all are welcome, all are welcome in this place” and setting out food for a community potlatch.