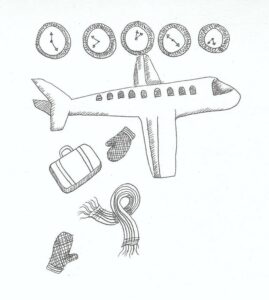 When the hustle and bustle of the first semester had finally come to an end, many students flocked home to enjoy some well-deserved rest during the winter break. Some were excited to see friends and family while others were preparing for relaxing vacations. Unfortunately, the winter break proved to be a stressful time for those who found themselves in the middle of chaotic travel problems. Liam Grunau, a third-year physics major from Calgary, AB, was one of them.

Grunau was told by Air Canada staff that there was a “malfunction in the de-icing equipment [at] the Calgary airport, due to it being -30 degrees Celsius in Calgary at the time.” He elaborated: “I was told […] that the equipment could not be fixed anytime soon, and planes in Calgary could not take off, so there were no free spots for planes to land or dock to the airport until the de-icing equipment was fixed.”

With this news, the passengers unloaded from the plane and were tasked with their next mission: finding their bags. “When I got off the plane in Toronto that was supposed to head to Calgary, I went to go find my checked bag that was unpacked onto the carousel,” Grunau said. “The carousel area was very crowded,” he added. “Between two of the carousels, there were at least a hundred bags lined up. I finally found my bag after about 40 minutes of looking and waiting.”

Unfortunately for Grunau, there was more trouble to come. “Upon cancelling the flight, Air Canada staff stated [. . .] that they would not be providing hotels,” the student recalled. “It would have been nice if Air Canada had provided hotels for all of the passengers like me that had their flights cancelled,” he continued. “[Since] the issues experienced were almost all weather-related, they were out of any airline’s control.”

Luckily, he was able to get a room booked in a nearby hotel that night, “as just about everyone else in the airport needed a place to stay the night, too.” He was picked up the next day by his family living in Newmarket and managed to get a new flight booked for the following day. “I am very grateful that I was able to make it home before Christmas,” he concluded.

Sophie Tsaltas, a second-year chemistry student, had a similar experience with flight cancellations.

Tsaltas and her family had originally planned to go to Florida over the winter break for a holiday. On the morning of December 21, they were supposed to fly from Halifax to Toronto, then from Toronto to Fort Lauderdale. Their vacation plans were ruined before they had even started. She explained that “the storm out West meant that no planes were available to do the Halifax to Toronto flight.” To make matters worse, their airline didn’t properly reschedule their flights. “They would reschedule the first flight to Toronto, but forgot about the Fort Lauderdale flight completely,” she said.

Tsaltas and her family tried to fix their flight schedule but had no success. “[WestJet’s] phone line was so busy that we were on hold for 10 hours and after that time we still didn’t get anything resolved,” she said. “I wish they had better management of the phone line, and I wish they had properly rescheduled our flight,” she continued.

No longer able to go to Florida, Tsaltas’ family decided to go to Saco, Maine, “just to get somewhere” for the Christmas holidays. Little did they know, this alternate trip proved to be just as challenging as their flight fiasco.

“When we got there, there was a news crew outside our AirBNB reporting on a large storm that was happening the next day,” Tsaltas recounted. “There was a road outside our AirBNB that was right next to the ocean,” she added for context. “We left to go shopping the next day before the height of the storm, and when we came back [. . .], the road outside was gone, one of the doors was off its hinges, there was sand everywhere, and we had to evacuate the AirBNB and go elsewhere.”

Even after all that hassle, Tsaltas decided to look at her experience in a positive light. “My winter break was definitely more interesting and exciting! I definitely have a story to tell now,” she concluded.