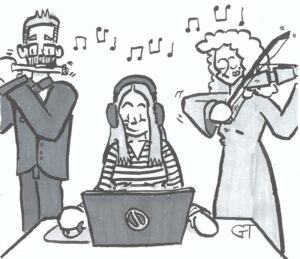 I have been listening to movie soundtracks since I started studying for my high school exams, and not just because instrumental music helps me focus; my love of music goes far beyond that.

It started, as many things in my life have, with Harry Potter. The soundtrack for these movies is not only magical, magnificent, and nostalgic, but also a musical masterpiece. Although there are four composers across the eight movies, they manage to create a cohesive soundtrack with meaningful motifs that span across the albums. I have listened to this music so many times that I recognize and sing along to certain songs. “Leaving Hogwarts” is  beautifully bittersweet, “Flight of the Order of the Phoenix” is short but majestic, and “Secrets of the Castle” has the most intense flute solo I have ever heard. Two songs that are quirky and fun are “The Knight Bus” and “Wizard Wheezes.” John Williams composed the music for the first three Harry Potter movies and his iconic “Hedwig’s Theme” became the memorable theme song for the entire franchise. Its core melody even reappears in the spin-off Fantastic Beasts movies.

When I found out that Alexandre Desplat, the composer of the music for the last two Harry Potter films, had also composed the soundtrack for Little Women (2019), I knew I had to listen to it. I immediately fell in love and have since explored his musical style across his other works. The Little Women soundtrack is perfect for studying, so quiet and light that it’s almost white noise. Often when I’m writing while listening to this soundtrack, I fall into a kind of trance; I find myself completely absorbed in the words and hardly notice the time passing. Desplat’s music is unique, whimsical, and absolutely beautiful.

One of my favourite composers of all time is Tchaikovsky. I started listening to his music purely for nostalgic reasons; I participated in my dance academy’s performance of The Nutcracker for five years before I graduated from high school. For me, this score will always represent the beginning of Nutcracker (and the holiday) season. My favourite songs from the ballet are “Waltz of the Snowflakes” and “Grand pas de deux.” His other works are also brilliant; I particularly love the haunting Swan Lake and dreamy The Sleeping Beauty (keep an eye out for some recognizable melodies!). Fun fact: for a few years, we substituted “Waltz of the Flowers” for “Valse” from Swan Lake in our production of The Nutcracker.

This next artist is not a composer but arranges renditions of songs for the piano. Emile Pandolfi is a concert pianist whom I discovered last year and has entranced me with his performance of Disney and Broadway songs ever since. His are exquisite and complex adaptations that make my heart happy every time I listen to them. I desperately want to find his arrangements online, but I have dug deep and only managed to find two of them; it seems as though he is very protective of his scores.

If you want renditions of recognizable pop songs, The Piano Guys are the ones to turn to. Their albums are replete with contemporary pop hits performed by piano and cello. As a pianist, I especially appreciate group member Jon Schmidt’s originals “Waterfall” and “All Of Me.” I would also recommend the Royal Philharmonic Orchestra’s arrangements, especially their album Symphonic Queen – The Greatest Hits.

Instrumental music, for me, is not only essential for the school year, but also deserving of my full attention. For anyone who is easily distracted by their environment, I hope this music helps you focus while studying for exams. For anyone wanting to listen purely for pleasure, I hope this music lifts you up and carries you away to a different world, as it does for me.