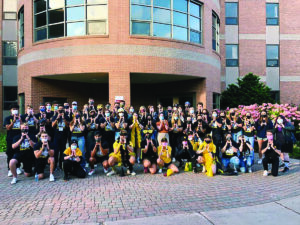 Student’s opinions on the upcoming renovations of Harper Hall

Harper Hall, one of Mt. A’s largest residences that is known for being fun, outgoing, and community-oriented, will close this summer until September 2024 for renovations. To some, this news is exciting as Harper Hall will soon undergo renovations that are long overdue. When Mt. A alumnus Brenden Nobes moved his daughter Eliza into Harper Hall three years ago, he said that the building looked the same as when he lived there in 1991.

Ben Hopper, who was one of Harper Hall’s social chairs last year, explained that in his first year, the hot water valve in his room broke. He was woken up in the middle of the night by his RA, who he assumed must have gotten reports about water coming out from under his door.

Despite Hopper being concerned about belongings in his room, he explained that the night of the flood was “a lot of fun.” Hopper’s wing in the building was flooded with water, and he explained that while waiting for the plumber to come, “we took out our boogie board and started flying down the hall.” He continued by saying, “We made the best of a bad situation which embodies Harper as a whole, we always know how to have the most fun.”

Besides the flooding that occurred in the residence, Hopper added that “the heating doesn’t really work, and the elevator was always shutting down.”

However the planned renovations are concerning to some. A couple current and past students who lived in Harper explained their concerns about the renovations in regard to the removal of the communal bathrooms.

Carson Rafuse, one of Harper Hall’s social chairs during the 2019-2020 school year, spoke on the benefits of communal bathrooms, saying: “There was always so much movement around. You weren’t always in your room and by going to the bathroom you met people. I met two of my best friends in the bathroom.” Rafuse continued: “I am a big advocate for communal washrooms because it helps to make the residence feel like a residence and it helps to build that community.”

Some students explained that the removal of communal washrooms provides incoming students with issues of affordability.

Olivia Hart, the current vice president of Harper Hall said, “Not only do the communal bathrooms foster a sense of community but it’s also an affordable option for a lot of people.” Hart explains that the University aims to make Harper Hall more accessible by building ramps and fixing the elevator. “Harper obviously needs this but it’s kind of ironic in a lot of ways… some people can’t afford to live in this, for students with physical disabilities you’re pricing them out in a lot of ways,” said Hart.

Rafuse agreed, saying, “I know that in doing this they’ll be able to charge more because a single or shared ensuite costs more.”

Some students who live or have lived in Harper Hall worry that the removal of the communal washrooms may affect the tight-knit community that the residence is known for. Rafuse worries that Harper’s traditions may get lost because many events already have not happened in two years due to COVID, such as Harper Heals.

Harper Heals is an annual coffeehouse that was started by a former Harper resident named Scott Jones in 2013. Jones is a victim of a hate crime that left him paralyzed. “Every year Harper hosted a coffeehouse and donated to a local LGBTQ+organization,” Rafuse said.

“I’m going to miss the people, the closeness, and the energy that surrounded Harper because it really was a wonderful place to live in,” said Rafuse, an upcoming commerce graduate. “I hope the traditions live on, and I hope the spirit lives on.”

“The spirit and sense of community in Harper runs so strong,” Hart said. Hart explained that their House of the Year application will take the form of a scrapbook that will include Harper Hall’s traditions and iconic places and will attempt to display the spirit of the residence. Hart explained that this application will be a legacy gift to the next residents of Harper Hall.

The renovations of Harper Hall are bittersweet. Hart explains that the residence is getting the TLC it deserves, but there is a feeling that Harper Hall will not be the same. On April 1, the current house team is hosting an event at The Pond called “Harper Fools” where current and past residents will relive their favorite memories of Harper Hall. Events such as these reflect the tight-knit community of the residence that has run deep for years.

According to Hart, “there is a fear of who is going to pass on the torch, but it is a great opportunity for people to make new traditions.”