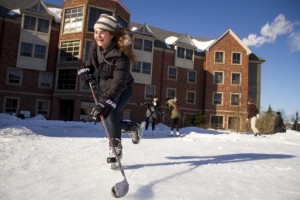 2014 got off to an stormy start as students, local residents, and Canadians across the country experienced a series of ice storms and blizzards that left many without power over the Christmas holidays. New Brunswick in particular was adversely affected by the weather.

Extended power outages and an overdue emergency plan for Charlotte County led to harsh criticism of the New Brunswick Emergency Measures Organization from the Fundy Regional Service Commission and a Saint John MLA last week. Approximately 82,000 New Brunswickers lost power at some point over the holidays.

Fourth-year student Bailey Shuttleworth Cucinelli and her family lost power for seven days at their home in Rothesay, New Brunswick, from Dec. 23 to 30. On Christmas Day her family “all wanted to get somewhere warm,” so they turned off their water and split up to stay with friends.

“It was fun at first,” she said, but “it was really hard for Christmas, because we all really wanted to be together.” Shuttleworth Cucinelli returned to Sackville for a couple days until power returned.

Robert McCormack, director of facilities management at Mount Allison University, said that his staff was on duty throughout the break. McCormack described this winter as “the worst [I’ve] seen in a long time.” During the break, the team awaited information from the ground manager about whether intervention is needed. McCormack described the process as “sort of an art, because you [have] limited resources and you want to get the maximum effect” adding that “the timing is so critical.”

Maintaining the path between Thornton House and Jennings Dinning Hall was the top priority for facilities management, followed by monitoring the weather in order to determine if there may be a need for school to shutdown.

In cases of extreme inclement weather, the facilities management team first decides based on weather there needs to be a day off by examining forecasts and how many other institutions have closed down on that day.

If the team concludes that the school should shut down for a day, McCormack gives an early morning call to president Robert Campbell, who makes the final decision.

McCormack said that “personal safety, if the building are accessible, and timing, too” are determining factors when assessing the need for a day off. He added that there is a lot of difficulty making this decision because “people will always say you should have closed,” he himself receiving some complaint emails recently.

Dean of Science Jeff Ollerhead discussed some of the implications of the recent weather relating to broader climate patterns. Ollerhead said weather is highly variable by nature and that this year’s winter has not been too dramatic.

Ollerhead stated that climate, rather than isolated weather incidents, should be the focus of investigation. Climate change “will [potentially] lead to things we haven’t seen before,” he said.

A number of Mt. A students had their travel plans affected by the severe weather.

Fourth-year student Georgia Sibold described the frustrating experience of her two day delay in Toronto. The ordeal involved excessive lines, numerous delays, cancellations, crowds and what she described as “a sea of bags” at the baggage carrousel. Sibold missed the first two days of classes but said her professors were responsive and understanding of her absence.

Fourth-year student Bryan Downey also spent more than twenty-four hours in the Toronto airport after his flight to Jan. 6 flight to Moncton was delayed repeatedly before it was finally cancelled and rescheduled. While he slept on the airport floor and spent more than three hours searching for his bags, he counted himself lucky compared to those who spent days of uncertainty at the airport waiting to fly.

Ollerhead said the alarm over the weather was largely due to the timing, given the high number of people travelling. If the problems had occurred a week later Ollerhead said he believes most people “wouldn’t even have noticed.”