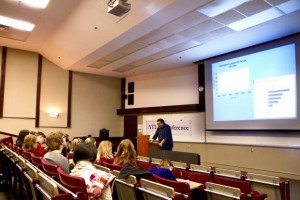 For the first time the conference was kicked off on Thursday with an international relations-themed trivia night at The Pond. The following evening a panel discussion with Mount Allison University professors was held, which this year included James Devine, Wayne Hunt, and Liam Keliher. This event was followed by the ATLIS’s traditional reception hosted by Mt. A President Robert Campbell at Hammond House.

The bulk of the conference was made up of seven student presentations on Saturday addressing this year’s theme: “Challenges to Future World Security: Food, Energy, and Privacy.” The conference attracted three student speakers from outside Mt. A, including two masters students from Dalhousie University.

In general she said she enjoyed her visit to Sackville and believes that the ATLIS conference is important because “people are able to show the really cool things they do in their undergrads.”

ATLIS President Sydney Logan said this year’s conference theme was intended to be broad and accessible. By selecting a “popular topic” the organization was able to find speakers easily, given that most participants “had something they were already interested in and wanted to talk about.”

The broad scope of “future security” allowed for a wide range of presentations ranging from food security, to internet security, and even the “securitization of immigration” in Canada.

Logan said the weekend was a success in a number of respects, in particular the high registration rate of fifty-one students. Logan was also enthusiastic that the keynote speaker, A. Haroon Akram-Lodhi, attended nearly all the conference events.

Though they were happy with this year’s success, in an interview with The Argosy the executive expressed some concern about the future of the organization, since most of those holding executive positions this year are graduating in May. As Robert Campbell said during a toast at his reception, ATLIS’ enduring success at Mt. A is exceptional for a student-directed organization.

Akram-Lodhi, a professor of Agrarian Political Economy at Trent University, concluded the conference on Saturday evening. An intimate discussion of his recent book, Hungry for Change—Farmers, Food Justice and the Agrarian Question, was also held on Sunday morning. Although it was open to other participants, this event was only attended by six members of the ATLIS executive.

Akram-Lodhi said that the principal argument of his address was, “the fundamental cause of hunger today is the way in which our food system locally nationally and internationally operates,” rather than a lack of food. Akram-Lodhi maintains that current levels of global food production are more than enough to feed the planet, and holds the “global corporate food regime” responsible for food insecurity.

Akram-Lodhi said it is important for such discussions to occur on campuses because “Food education is extremely important in terms in how we individually and collectively grow over time and how we interact within our community.” In an interview he described campuses as “food desserts,” saying sometimes “[students] don’t have the choice to be able to have healthy nutritious food at a reasonable price.” This environment “encourages [students] to continue with inappropriate diets.” Akram-Lodhi has been critical of the practices of food service providers like Aramark, a company he mentioned by name in his address. Aramark holds an exclusive food services contract with Mt. A.