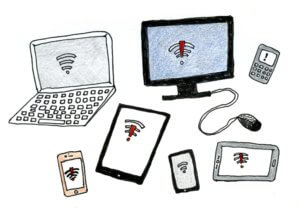 The end of an unpleasant era

Since the beginning of the term, Mount Allison students living in Windsor Hall have been having trouble connecting to the Wi-Fi in their residence, causing frustration among students.

“I can’t get work done here. I have to actually go to the library, which is quite a hike to be honest,” said Joe Caswell, a first-year student who lives in Windsor.

He also said that the lack of connectivity is damaging the spirit of the residence: “Windsor seems empty all the time because no one wants to stay here to do work, so it’s having an impact on our sense of community.”

“[Computing Services] told me to use an Ethernet cable but I can’t use one with my laptop so I couldn’t do work in my dorm for a long time, which was super annoying,” said Amelia Williams, a first-year student. “I had to go to other places or use my data with a hot spot. It’s not fair to people who don’t have hot spots to use. Anyone should be able to do work in their dorm room when they pay to go to university.”

Last week, students became fed up with the situation and sent  a wave of emails to Computing Services. There was a competition held to see which floor could send the most emails.

“I started this competition to encourage Windsor to take action in order for us to get our Wi-Fi,” said Rohin Minocha-McKenney, the first-year Windsor rep and MASU councillor who organized the competition. “Before, some people would send emails but we wouldn’t get much response and no action from Computing Services at all. But once we were able to have more than 54 emails sent, they finally listened and are now fixing the Wi-Fi.”

“I understand why people would get frustrated,” said John Gillis, the director of information and technology at Mt. A. “You need connectivity. We all live with devices all the time, so I understand the frustration.”

Windsor Hall has been under construction for the last year. The renovation was completed this summer. “We installed these access points as part of the renovation, so that happened at the end of August,” Gillis explained. “We weren’t aware of any problems with them until the end of September. There appears to be a problem with the software on each access point and over time the access point stops working.

“An access point is the antenna that sends out the Wi-Fi radio signal that you use to connect your phone or other devices to access the internet. These ones [in Windsor] are designed to ‘talk to each other’ and automatically adjust their signals to provide the best possible Wi-Fi coverage,” said Gillis.

However, the end of the Windsor Hall’s Wi-Fi problems is nearing. “We think we’ve identified what the problem is and so we’ve been on the phone with [the manufacturer] for periods of time for the last couple weeks trying to troubleshoot it,” said Gillis. “Over the last day or so we think we’ve figured out what the source of the problem is. We’ve done some adjustments to the settings, so we think we have it stable for now.”

Windsor is getting a software update to fix the problem completely in the near future, Gillis said: “We are hoping to be able to install it before everyone returns from the study break next week. In the meantime we are monitoring the Wi-Fi performance and can reset the access points manually if Wi-Fi access drops off again.”

This fix seems to be working for most of the residents. First-year student Michaela Kaiser said, “A couple days ago my laptop connected to the Wi-Fi [in Windsor] for the first time since I’ve moved to New Brunswick and I cried tears of joy.”