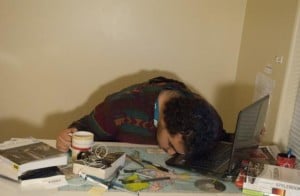 While unpaid internships have traditionally been a useful means for a student to gain relevant experience in the field of his or her choosing, the recent flux of deaths reported in the media related to these internships has spotlighted its glaring inequities.

If you are a company that is only worried about the bottom line and cutting cost, there is nothing stopping you from taking advantage of the free labour that you have been so gratuitously presented with through the education system. This is when forcing your unpaid interns to work very long hours—consecutive overtimes, late nights, and early mornings—under threat of not granting the necessary credits for their graduation, becomes the accepted norm. Never mind that those hours are far beyond what is required of them to graduate; never mind that doing so places these interns at serious risk of bodily and psychological harm.

While reading through the comments on a CBC article about “unpaid intern hell,” I came across one in particular that struck a nerve:

“A student studying at some school shows up at THERE [sic] CHOICE OF A WORK PLACE PROVIDER, suddenly expects pay, suddenly cries out that ‘experience’ is looking more like ‘work’ , then pulls out their ‘union card’ with threats isn’t going to appeal to many future work site employer sites. Whats [sic] the difference if a student spends four weeks in class or work site. Do they get paid to be in class? Maybe the School program should cover the student travel expenses.”

It unfortunately continues on, in the hell pits of grammatical folly, but the idea that somehow being given “THERE [sic] CHOICE” of a workplace means forgoing one’s right to be treated with dignity and respect is quite outdated. And that’s not even the case—in almost all of the reported student deaths, the unpaid internship was in fact required in order for the student to graduate.

Slight aside here, but I used to have a friend who once proudly proclaimed, without a shred of irony, that he was ready to work for his “capitalist overlords.” There were other gems that came out of his mouth that day (“I intend to use my privilege of education to further oppress my fellow men”), but what’s striking in what he said was that he perfectly understood the system he was eventually going to be a part of—if not already—and all of its power imbalances.

We have established labour laws and unions for a reason. History has taught us that unfettered access and power over labourers is a foolproof way for exploitation to occur. According to the Canadian Intern Association, there are few laws in Canada defining or regulating internships directly. In New Brunswick, the Employment Standards Act sets the minimum wage at ten dollars per hour for most employees, but it is unclear if this amount would apply to interns.

If unpaid internships worked the way they were supposed to work, like a reasonable exchange of labour for knowledge, we wouldn’t even be having this talk. I’m not sure I agree with the calls to completely abolish unpaid internships, since ideal versions of them still do exist, but governments should recognize and close the legal loopholes that allow for student labour exploitation to occur in these settings. Schools, such as Sheridan College in Oakville, Ontario, who require students to pay tuition fees even while on their mandatory unpaid practicums, should truly be disgraced to call themselves educational institutions.