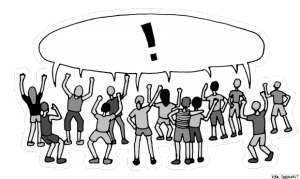 University is not as welcoming to new students as orientation week organizers at various schools would have you believe.

This can clearly be seen in the controversy surrounding a chant that took place during Saint Mary’s University (SMU) orientation week.

The controversy surrounding SMU began with a chant that I doubt any student organizer or first year participant thought twice about. That is, until a video appeared on the Internet and the media picked up the story and ran with it. Soon, even the premier of Nova Scotia was throwing in his two cents about the controversy.

The chant in question was an acronym  of the word young: “Y is for your sister, O is for ‘oh so tight,’ U is for underage, N is for no consent, G is for grab that ass—Saint Mary’s boys we like them young.”  It is obvious that the student organizers at SMU made a stupid mistake by approving this chant for use in orientation week.

However, stupid mistakes are not something that students at SMU have a monopoly on. University is a time when many young adults find their way in life precisely by making profound errors in judgment, witnessing the consequences, and learning for the better because of it. As we evaluate what occurred at SMU we must keep these truths in mind, and remember to take  a critical look at ourselves.

When I was a starry-eyed, green-as-grass frosh in the fall of 2010, I participated in a chant, while differing in lyrics from the one at SMU, that expressed intolerance for others and a disregard for the welcoming environment that frosh week should be. Orientation week leaders (who shall remain nameless) walked students from Campbell Hall over to the south side residences. While we performed our relentless, Bud Light-fuelled march, we chanted, “hickory dickory dock, south side sucks the cock.”

I was a participant in a sexist and homophobic chant, and I didn’t think twice about it until years later.

Rather than taking this opportunity to solely criticize SMU, we should take it as a reminder of the bigoted and intolerant actions we have all taken part in and the thoughts we have all had. The student organizers of the chant at SMU are you and they are me. The ignorance that drove their willingness to chant about sexual violence is something that exists within all of us. And it is something that we must constantly be on guard against, rather than only thinking about it when controversies like this rear their ugly head.

The controversy at SMU, while attention-grabbing  at the moment, is something that will eventually fade away as students, faculty, and administrators at the school return to normalcy. This is why bigotry is so insidious. It receives attention for a short time while a video trends on YouTube, but then attention drifts and we forget about our prejudices. We realize certain aspects of our prejudice for a short time but then soon forget while the new episode of Breaking Bad plays. The time must come when we realize the need to address bigotry at all times, and not just when student leaders make a mistake. Please join me in remembering the SMU chant in the spring, in ten years, in twenty years, and for the rest of your lives. And please remember that to rise above the bigotry and ignorance embodied in this chant is to not only become a better student, but a better human being.