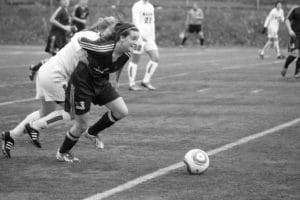 Exercise is a word that holds many different meanings to different people. To me, exercise is a word that brings both a smile to my face and a hidden discomfort. Physical activity in the form of sports has had a large role in my life. As a child, I played a plethora of sports growing up and always did it out of pure enjoyment – never with an ulterior motive in mind. It wasn’t until I was a teenager that my outlook on exercise started to change. As I consumed magazine articles and television shows, I began to see that my body didn’t reflect those in the media.

Mainstream media feeds us unrealistic images that people of all genders feel the need to achieve. Unlike media representations of women, as a teenager I was not tall and I was not stick thin. I began to see exercise as a way to achieve a body that I thought would bring me satisfaction and happiness, instead of as something I simply enjoyed doing. I found media representations almost all-consuming and believed that if I could just achieve the body presented to me, it would reduce whatever stress I happened to be experiencing.

I can remember watching Friends as a young teenager and focusing on Rachel and Monica’s slender figures. Monica’s weight was often a topic of discussion on the show, as she had been overweight growing up. I would watch and wonder how I too could look like that when I was older. The images of these women stuck with me and motivated me while I exercised.

In other words, I was quick to think that I could achieve what the media was promoting. Even though I was a happy and very fortunate person, I somehow believed if I was thinner and had a toned body, I would like myself more and attract more people to me. I think a lot of people get caught in the trap of seeing this representation, believing it and then trying to reproduce it themselves.

Although I already had a level of awareness with respect to the effect the media was having on me, it was not until I began taking courses such as women’s and gender studies (WGST) that I realized the extent to which I had bought into the beauty and dieting industry. These industries target young women and girls, causing them to believe they must take extreme measures in order to be appealing to society.

In the end, regardless of the weight I lost, I always wound up in the same unsatisfied place with no greater self-appreciation or confidence. Through the knowledge I have gained in taking WGST, I am striving to examine and deconstruct the media that I encounter in my everyday life, specifically how it targets women. As I have learned through my studies, nothing can be taken at face value; one must deeply analyze and ask questions. Taking important courses like WGST hasn’t solved my problems surrounding body image, but it most definitely has helped me see the world more clearly and fuel me to continue investigating inaccurate and often harmful images of women in the media.

While Mount Allison offers many interesting and engaging courses, it is courses such as WGST that provide  knowledge that empowers you and can be applied in your everyday life. On many occasions  I have walked out of class and immediately used the knowledge I have just gained.

The application of WGST course content to my own life allowed me to spend less time obsessing over my self-image and begin to deconstruct the representations I’ve been presented with. I wish everyone was fortunate enough to take WGST in order to question not only body image, but other assumptions that go unchallenged.