Why You Should Get a Library Card 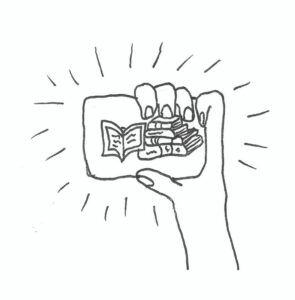 Turns out Arthur the Aardvark was correct: having fun isn’t hard when you have a library card! Or at least, I think he said that. I was too busy clocking some serious hours with my weekly stack of library books when I was growing up so I didn’t have much time to watch PBS Kids. Despite some initial detractors, books have proven themselves to be a real global phenomenon and are here to stay! Unfortunately, the ever-lecherous capitalists are determined to keep these enlightening tomes out of the hands of the common worker: $36.00 for the newest Ottessa Moshfegh novel is beyond my weekly student budget.

Thankfully, Sackville’s hottest club is also its most affordable. The Sackville Library has everything (figuratively and literally), so the answer to my initial question is quite simple: you should get a library card because it provides free access to a world of knowledge, entertainment, and art for everyone, irrespective of background. But when reflecting on the importance of libraries, I was struck by how much of a role the library has played in my own life, beyond keeping me furnished with an endless supply of reading materials.

Growing up in my small seaside town in Nova Scotia, our library had the slightly shabby and worn-down edges befitting our community’s reputation as a “has-been”. Nevertheless, this carpeted den on the second floor of town hall was formative in my childhood. At one point I was determined to get through the whole row of yellow-spined Nancy Drew hardcovers that occupied an entire shelf in the children’s section. Although I dropped off at about the #40 mark, I still loved walking down the hill to stuff my bag full of two or three books for the upcoming week.

For a stretch in elementary school, when my older brother and I were both too young to look after ourselves, we spent a lot of time hanging out in the library at the rural school where my dad worked whenever there was a winter storm day. The librarian would always be in as well and being the cool lady she was, she showed us how they prepared and catalogued new books. She deserves special recognition for recommending to my brother a new series that was  receiving a lot of buzz called Diary of a Wimpy Kid.

In my home province, the library in downtown Halifax gets a lot of attention. All I can say about the Halifax Central Library is that they charged me like 36 dollars in late fees for two overdue books that my mom insisted I had a public duty to pay back. However, I promptly got my revenge by spilling a bottle of lemonade all over the floor five minutes later! Take that, city slickers!

In Grade 10 I was going through what could comically be referred to as a “flop era,” but in reality, was a pretty rough patch of being dumped by middle school friends and struggling to fit in in the interim. I was not an avid patron of my high school library, but it became a refuge where I could sit by myself under the guise of catching up on homework. I was essentially friendless, but that changed one day when a girl in my math class blew in, sat down across from me, and immediately struck up a conversation. I remember leaving to get on the bus flustered in the best way by how well we had hit it off, while also being admittedly relieved that I was not a total object of social repulsion. She became my closest friend in high school and was the first person I met who helped me realize that it is okay to be yourself around others, as long as you are with the right people. Our friend group eventually expanded to make the rest of Grade 11 and 12 not only bearable, but surprisingly fun.

I picked up my Sackville Public Library card last spring after moving out of residence. Admittedly, I hadn’t considered it before my friend mentioned that she had signed up for one, but once she did, I realized what a brilliant idea it was. I spent the rest of May reading Wolf Hall on the air mattress which occupied my living room floor while waiting for my summer job to start (and apartment furniture to arrive). For the past year now, I have been an avid patron of the Sackville Library. When I leave this town that has been my full-time home for over two years, I know that wherever I end up, one of the first things I will be doing is signing up for a library card. After all, libraries do have a knack for being a sort of home for me.