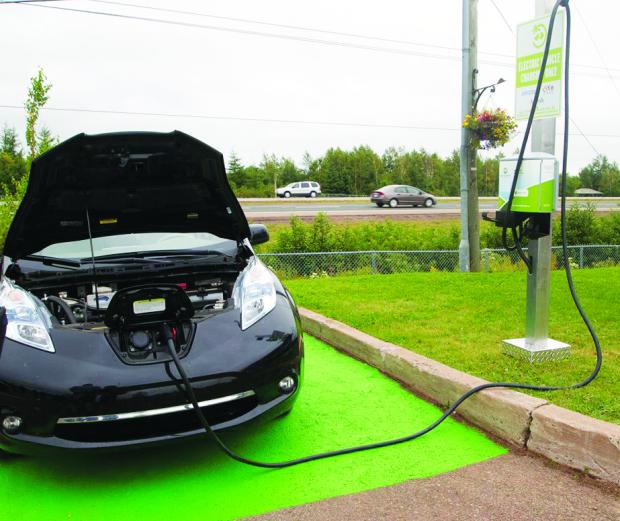 Electric car owners can now charge up in Sackville, thanks in part to a major financial contribution from Mount Allison students. On Sept. 2, a crowd of Sackville locals and students gathered at the Sackville Visitor Information Centre in support of the recently installed electric vehicle charging station, manufactured by Sun Country Highway. EOS Eco-Energy Inc. partnered with the Town of Sackville to install the electric vehicle charging station with finances from the town as well as from the Mount Allison Student Union’s Green Investment Fund.

The GIF reached $24,350 over the 2013-2014 academic year. $10,500 of that money went to the charging station. $6,000 of the fund was allocated for the installation of the charging station, $4,000 toward an honorarium for the coordinator of the anti-carbon emission campaign for EOS energy, and $500 for a promotional campaign.

MASU funds projects aimed at reducing Sackville’s carbon use through the GIF. The fund has grown since its 2009 creation, as only a small number of projects have been approved. Students give $10 of their annual fees to the fund.

The charger’s manufacturer, Sun Country Highway, sells the level II charger, called the evCHARGER All-in-one, for $2,800. It costs an extra $4,950 to install. Each charge usually costs between $1 and $2, which is paid for by the Town.

The Tesla Model S, a luxury electric car manufactured by Tesla Motors, was brought to the site for the official initial charging demonstration by Sun Country Highway. The Model S is one of the more expensive electric cars on the market, costing $78,970. Although electric car companies are on the way to making cheaper electric vehicles, not many are currently available.

Many of the charging station’s supporters, including Mt. A professor Brad Walters and some of his students, were able to witness the functionality of the charger and learn about the day-to-day upkeep of an electric vehicle from local and non-local vehicle owners.

“We’re here for four or five years, but students on a whole have been here for 175 years,” said Annie Sherry, who oversees the GIF as MASU’s vice-president external affairs. “They aren’t necessarily going to see the profits themselves, but they’re building for the town to start moving towards an environmentally friendly future,” she said.

At least one Mount Allison student ssw its long-term pay-off, Zoe Luba said “It’s important to have the infrastructure established so that people will actually buy the cars.”

The launch also included speeches from Sackville Mayor Bob Berry and Amanda Marlin, the executive director of EOS Eco-Energy Inc. Marlin lauded the financial contribution of MASU, calling them “a forward thinking bunch.” Marlin also predicted that the project will be financially beneficial to local businesses in Sackville. She said, “people will stop to charge up, walk through Waterfowl Park [and] get something to eat.”

Even with the prospective financial rewards, the environmental benefits were still most heavily touted. “We talked for years about projects and incentives that could help [reduce emissions],” said Berry, “We are joining an ever growing network of charging stations across Canada.”