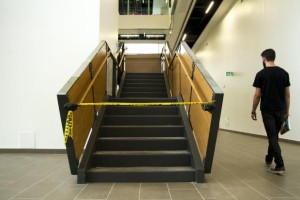 Classes in the Purdy Crawford Centre for the Arts began on schedule while work  on the building continues. A significant portion of this work is to repair the damage the Moyter-Fancy theatre sustained in a flood.

“There were deadlines for getting moves done, there were deadlines for getting faculty and staff in their spaces and offices, or all the different work on the building, and all of those, I hate to say, move all the time. Ultimately we know when the start of classes is and that drives the dates for the moves,” said Robert Inglis, vice-president of administration for Mt. A.

Work also continues on the central staircase in the atrium.

“On the top flight the side rails are not in yet, so that’s a safety issue, and the treading on the first floor requires some work,” said MacCormack.

In order to be completed, the stairs need parts that have been ordered but that have yet to come in.

The stairs were cordoned off during the first week of the school year and the building’s occupants had to take the elevator or one of two back staircases to reach the upper floors.

Before the new building opened, the fine arts department was divided between Hart Hall’s basement and the Gairdner Building. The abundant natural light of the new space is a welcome change. A series of windows allow for internal lighting, despite the building’s outward appearance of opacity.

“Including my time as a student, I’ve spent 37 years in the basement, so just the sense of light, the height of the ceilings and the sense of airiness really changes the sense of space,” said Dan Steeves, a printmaking instructor and technician.

Despite the delays, occupants of the building remain “very excited” about the new space, Steeves included.

“Even though our footprint, in printmaking at least, isn’t much bigger, maybe 50 square feet bigger, it’s just so much more spacious and airy. Everything is better organized,” Steeves said.

The building was designed with input from those who would use the building the most.

“The architects have been phenomena […] We really felt like we were part of the process,” Steeves said.

Still under construction, the Motyer-Fancy Theater remains unusable at press time, due to a flood caused by a faulty valve in the fire sprinkler system during a test. The theatre was nearly complete when the flood happened. “We quite quickly learned that the floor had to be replaced. That means bringing back the floor contractor, that means getting the materials and replacing the floor, ” said Inglis.

A number of lights were also damaged in the flood, but MacCormack said, “We’ll work with faculty, and we’ll work around that.”

Inglis highlighted that the damage could have been much worse. The leak might have happened outside of work hours, or if the mobile seating had been installed.

“Right now, [liability for the theatre has] yet to be determined, but various insurance firms are involved,” said Inglis.

The building opens just weeks after the death of its namesake Purdy Crawford, the alumnus, lawyer, businessperson, and former chancellor of Mt. A. Flags on campus were lowered to half-mast on Aug. 13 in Crawford’s honor.

The building’s official opening is scheduled for Oct. 3, and will include guided tours and an art exhibition of work by current students and alumni.