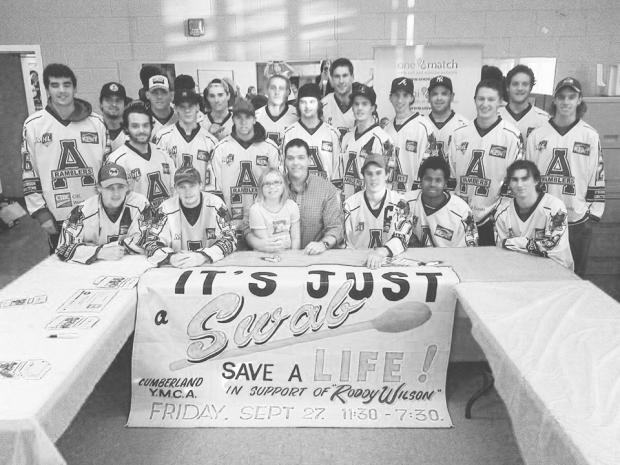 This drive is part of a larger initiative to get Rod Wilson, of Amherst, NS, a stem cell match. Over 300 swabs were collected at a related event in Amherst.

Cumberland News Now reported that the Dooley’s manager had been coping with non-Hodgkins lymphoma for years before it returned, leaving him in need of a stem cell transplant.

Wilson’s wife, Robyn Wilson, said stem cell donation is “so easy and simple… and it could save someone’s life.” Before Wilson needed the transplant, Robyn didn’t know much about stem cell donating, “it’s unfortunate that it took this to happen to my husband to make me aware of it,” she admitted.

Tessa Morris, an International Relations student and Ontario native, helped organize the Sackville drive. Morris reached out to the OneMatch network after learning through her parents that a family friend had been diagnosed with Myelodysplastic Syndrome. After hearing the news, Morris emailed  Donor Management Coordinator, Jessica Stergiou, hoping she could get more involved with the network back in Sackville. It happened that Wilson was seeking a donor, and volunteers quickly orchestrated a drive at Mt. A.

The OneMatch Network in Canada is managed by Canadian Blood Services, though it is part of an international network of over 20 million people. OneMatch helps patients who can’t find matches within their own families, which is about 70 per cent of all patients who need transplants. If a match can’t be found within the network then drives are organized to get more people registered and increase the chances of getting a match.

Though millions are registered worldwide, last year saw “fifty-three Canadians donate stem cells to Canadians” said Stergiou, adding that “we have about 1000 patients in Canada alone that are searching for a match.”

For some, it seems that a big challenge is misconceptions about stem cell and marrow donating. Mt. A Andrew Stone said “I don’t know as much as I should,” but went on to say that he recognized the importance of stem cell donations, adding that he would participate “in anything alleviating pain from people who were suffering.”

Other members of the public worry about the evasiveness of the procedure itself. Stergiou noted that the chances of undergoing the procedure are rare. Also, it is an outpatient procedure even in the case of bone marrow injection, which is used for special situations if the blood transplant is not adequate enough. In her experience, since donating allows you to save a life, Stergiou said that ultimately, “I don’t think you could put an amount, dollar (or) a pain tag on the value of that.”

Participants who signed up at the event underwent a brief process involving swabbing their mouths and filling out information about their medical history, most participants will not get calls back but for those who do they will have to undergo one of two procedures to transplant their stem cells.

Stergiou noted that the target groups are males and young people, because the stem cells of these groups of people have been found to produce successful outcomes. University campuses are then the most ideal places to register potential donors since there is a concentration of people between the ages of seventeen and thirty-five.

A harder group to reach are ethnic minorities. Since patients are best matched with donors with a shared ethnic background it is hard to find matches for minorities. This puts a diverse country like Canada in a difficult situation.

In November OneMatch will return to Mt. A for a bigger drive that they hope will reach even more people.