Black Tie bares it all 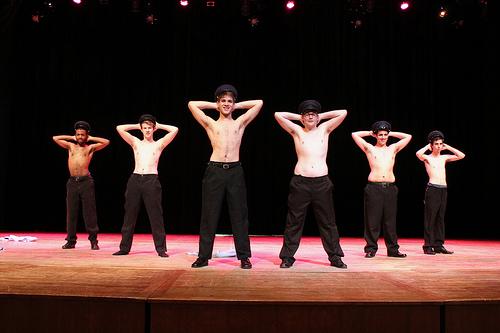 Mt. A students flaunt it in The Full Monty.

All was bared for Black Tie Productions’s presentation of The Full Monty, and it was memorable, to say the least. A critically-acclaimed movie-turned-musical written by Terrance McNally, The Full Monty tells the story of six unemployed steelworkers from Buffalo with low self worth, no future prospects, questions of gender roles, and pressure from their loved ones. The men decide that things have got to change.

The opening scene portrays a group of men receiving their last pay before they are laid off, and it is in this scene that we hear the opening to a great night of music, with the song that bares the question, “What is a man?” Among that group of men was Jerry Lukowski, played by Ben Winn, whose character is currently divorced and facing outstanding child support payments for his son, played by Max Beaver. Dave Bukatinsky, played by Colin Frotten, is a character who faces body image issues and recent unemployment, which are hurting his marriage. It is then that Jerry and Dave notice an ad of a touring Chippendale group and notice the loving reception the group receives, something Jerry and Dave so desperately want. Jerry, then, commits to creating his own Chippendale group to save his relationship with his son, only, instead of the traditional getup, he plans to go the “full monty”—bare everything!

From there, they recruit fellow unemployed steelworker Malcolm Macgregor, played by Nick Vince, who they find trying to take his own life, until they befriend him and sing one of the stand-out tunes of the night, titled “Big-Ass Rock.” The tune’s witty lyrics tell of the different ways you could assist in a friend’s death other than having them commit suicide. It had the whole crowd breaking out in laughter. They then recruit fellow unemployed steelworker Harold Nichols, played by Tom Hearn, who needs the quick cash to keep up with his wife’s expensive lifestyle.

Tryouts are then held to find the final pieces of the group, coined “Hot Metal,” where they find Ethan Girard, played by Zack Kennedy, who has “the goods” to be in the group, and Noah “Horse” T. Simmons, played by Winton Brangman who, although unemployed and in his fifties, impresses the group with his charisma and audacity in the song “Big Black Man.” By facing problems of fears and anxieties, the production showed that “sexy [does] take practice.” The men are then ready for the final number, which culminates in the group raunchily going the “full monty”.

The last number was one of the many highlights of the show, with the stage lighting, and fluid dance number created by Emma Fowler-Ross coming together perfectly. Brangman, a fourth year student, said “The Full Monty has been the best show I’ve been a part of here in my time at Mt. A. There were a number of nervous days. However, come opening night, there was an energy and feeling that took over, and I feel this resilient cast pulled together for an amazing show.” Portraying the characters in The Full Monty required a large amount of courage and professionalism, and the whole cast, with help for director Karen Valenne, did a great job in bringing their characters to life. Altogether, it made for a hilarious, enjoyable experience.