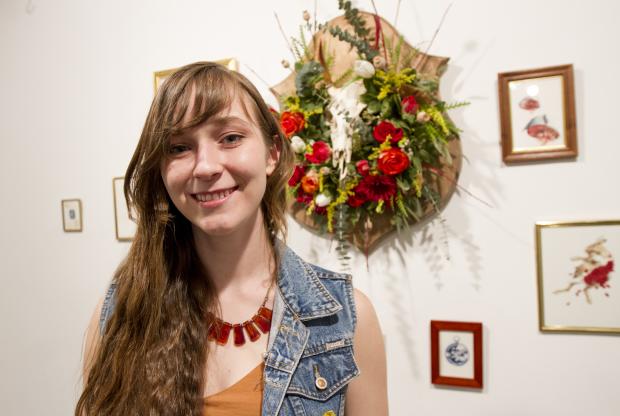 With graduation fast approaching, fourth-year fine arts student Krista Gunn was inspired to put together an exhibition, entitled “Hard to Find,” which focuses on nature, nostalgia, new adventures, and the points in her life that led to where she is now.

Though her pieces don’t have official titles, she informally refers to one of them as Earl Grey Tea Skies. The self-portrait depicts Gunn walking along the bridge at Waterfowl Park. The piece also features dozens of Tim Hortons earl grey tea tags, collaged together and spread out over the top half of the painting. The light blue colour of the tags creates the image of a clear sky.

“The Waterfowl Park was my first little sanctuary to be able to go there and be away from people,” Gunn said, recalling her old habit of walking through the park, Tim Hortons tea in hand, that she developed when she first came to Sackville.

Across from Earl Grey Tea Skies, an untitled piece portrays a little boy and a dog venturing into the forest together. It was inspired by a friend of hers who adopted an abandoned greyhound.

“Basically, after adopting this dog, the dog adopted her son,” Gunn said. “That dog went everywhere with her kid. It’s just this idea of the companionship with the animal…the kind of idea of going off on a new adventure.”

Gunn said that she and her family moved a lot when she was growing up. Before starting high school in Ontario, Gunn lived in the prairies for many years, and this rural environment influenced both her artistic process and the art itself.

Coming to New Brunswick to attend university allowed Gunn to reconnect with what she loved from the prairies.

“I’m not a city person. I don’t enjoy living and working around a large group of people,” she said.

A piece that received a lot of attention at the exhibition’s opening reception was a knitted stuffed rabbit, laying on its side, with pink knitted tube-like shapes protruding from the rabbit’s stomach to represent entrails. Gunn explained that it represented roadkill, something that she saw quite often while traveling.

“When I first learned to drive, the first animal I hit with my car was a rabbit,” said Gunn. “I ended a life because I wanted to get from point A to point B faster, and I found that was hard to reconcile with.”

Gunn said that this piece acts as a penance or an apology to the rabbit.

“Knitting, to me, has become the physical manifestation of time,” she said, noting the time-consuming process of knitting any object from scratch. “It took me so many hours to make this thing. I can take its life instantly, but it takes so much longer to put something back together.”

Finally, Gunn noted the piece displayed in the center of the exhibition. The piece consisted of a set of three terrariums in small glass casings. Along with the typical plants and soil, inside each terrarium sits two muskrat skulls and a starling skull, respectively.

Gunn described the piece as a juxtaposition of life and death, with plants growing and thriving around the remains of a deceased animal.

“I know things die, and it’s the human condition to deal with that,” she said. “These muskrats, their fur was used for humans, and their body was brought back to the environment and recycled by nature’s magical processes.”

These pieces, and others in the exhibition, will be on display at START Gallery until Mar. 15.