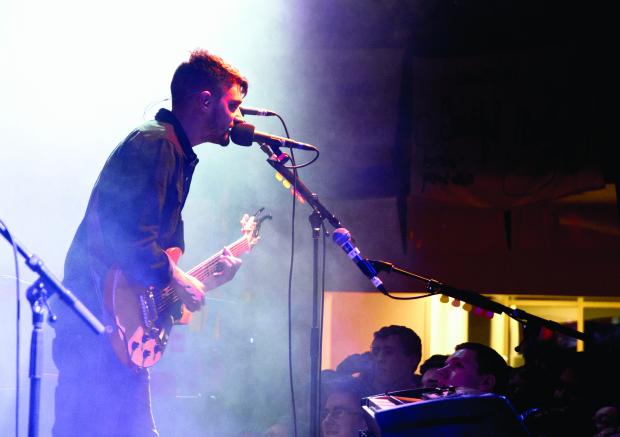 “This is a song about having a few drinks,” explained Hey Rosetta frontman Tim Baker, “because this town seems like it’s built on just fucking rolling around slightly drunk.”

As the crowd cheered, the band proceeded to launch into “Yer Spring,” a song that embodies everything that’s unique and great about Hey Rosetta. On their studio album, the track starts slowly, opening with lilting lyrics overshadowed by tinkling piano chords and a steady backbeat. Over the next five minutes the band gradually weaves in counter melodies supplied by violin, electric bass, cello and three back-up singers, respectively.

The track’s magic lies in Hey Rosetta’s unparalleled subtlety: the band builds up the song’s complexity with such care that the listener is left pleasantly bewildered by its intensity at the three minute mark. The song unfolds like a fire-cracker, exploding in slow motion, with the last haunting notes lingering in your ears long after the track ends. However, this was not my experience on Saturday night.

Technically, I was listening to the same song, but it lacked the richness and finesse of the studio version. I could see violinist Kinley Dowling and cellist Romesh Thavanathan performing enthusiastically on stage, but I could barely hear their instruments from my place in the audience.

As a result, Hey Rosetta simply didn’t sound like Hey Rosetta. The orchestral instruments for which the band is known were drowned out by the guitars and drum kit. The tambourines, trumpet and French horn were equally inaudible. Consequently, the audience was left with a lesser act that sounded canned and generic.

An inferior speaker system and the poor acoustics of Jennings Hall conspired against the band. Deprived of their nuanced dynamics and instrumental variation, there was frankly little to differentiate one song from the next. The overall effect was one of absence; the band’s drawn out chords were lost to the meal hall’s espresso bar and refill station.

The unengaged audience didn’t help matters. More than once, the band was forced to perform over a wave of chatter as members of the crowd talked among themselves. This effect was particularly evident from the second floor viewing area, which provided the perfect vantage point from which to watch a sea of students packed together and standing still. To be brutally honest, during the first 45 minutes of the act, the crowd was, with several exceptions, one of the least engaged I have ever seen at a live concert.

Yet, to Hey Rosetta’s credit, the band seemed to make the best out of bad circumstances, and by the end of the night the audience finally seemed to have loosened up.  It wasn’t a bad concert per se, it was just not the concert I would expect from a band of Hey Rosetta’s calibre.