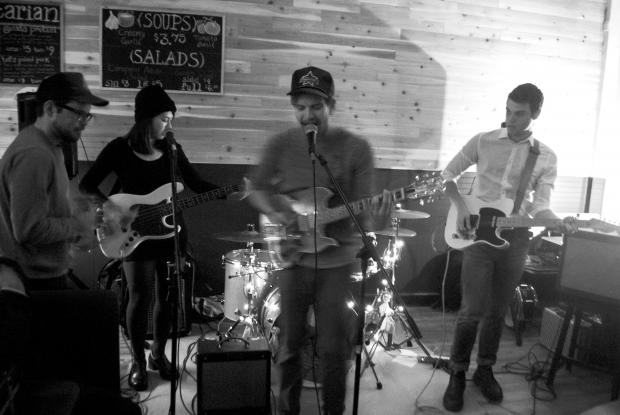 Pickles hosts an evening of music with local and touring bands.

Pickles European Deli hosted Esther Grey, an initially-solo Lucy Niles, and the short-but-sweet debut of Shitty Friends this past Friday. Though Halloween was already a thing of the past as of the small sandwich shop event, it got a bit of new life in the haunting atmosphere from Esther Grey’s chilling new EP. Accompanying the set was a preview of some new music being made in and around town.

The Mouthbreathers’ frontwoman Lucy Niles opened with a solo set that evolved into a twosome’s performance, when she invited her Mouthbreathers bandmate Josée Caron up to accompany her on the drums. The set featured a couple of new songs off a future LP that is still a work in progress, and songs from the Mouthbreathers’ latest EP, Stone Soup. Although it did not involve nearly as much moshing as typical Mouthbreathers’ performances, the audience was still lively, especially considering the stripped down nature of the performance.

Esther Grey from Guelph, Ontario filled the ‘from out of town’ spot on the bill. Their music came across as oddly festive. Forming a sinister harmony with the terrible wind outside and the dimly lit atmosphere, Esther Grey spooked the tiny deli venue. The band toured with a new fall 7”, released just six days before their appearance at Pickles, the entirety of which they played. Its three songs are all heavily distorted, guitar-riff driven, and ominously toned with pings and pangs that are intentionally out of tune. The vocals provide lyrics of looming doom that send chills to the core, culminating in a fantastically creepy holiday release.

Shitty Friends ended the night with their debut performance. Not adhering to their chosen adjective, the collective of individuals closely associated with the Sackville music scene—the band is Scott Royle, Dan Legere, Liz Kent, and Brendan Allison—played a sweet set that involved a lot of rotation between instruments. The rotation granted the music a wider range of sound, as the drummer, and with it the pace, switched three times throughout the set. They played a pop-punk set, fitting right into the general punk that most Sackville bands tend to fall into and Sackville audiences seem to identify with. The band even got a rare encore, but declined, having played all of their songs.

The show was another great instance of Pickles’, and more widely Sackville’s, ability to net enough local interest to make any band on their way to Halifax tempted to stop. It also functioned as a nice preview into what music is to come from within the Sackville-based bands. Some new songs from the Mouthbreathers, that promise to form a great end product expanding on the Stone Soup EP, and a debut performance that went over well, mean a promising future for Sackville music.