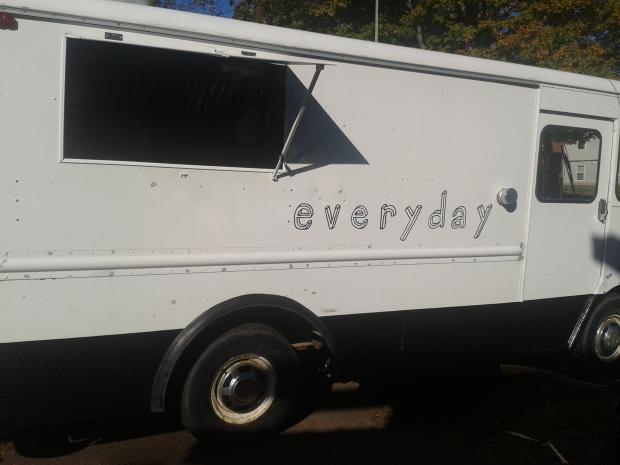 Although a relatively recent staple of metropolises and other urban centres the world over, even Sackville is now home to its own food truck. The Everyday Food Truck, which is owned and operated by Allison Crinkley and Jon McKiel, has been a mainstay of the York Street landscape for the last month. The truck is further evidence of a worldwide trend toward gourmet food trucks that diverge from the standard food truck fare of fish and chips, hotdogs, and hamburgers.

While the Everyday Food Truck is their first culinary venture in Sackville, both Crinkley, who attended culinary school, and McKiel, a local musician, have experience working in restaurants and the food truck industry. The pair purchased and briefly operated their first truck, Food Wolf, while living on the south shore of Nova Scotia. They sold it to another couple shortly before their relocation to Sackville. Food Wolf, the second place recipient of The Coast’s Best Food Truck of 2013 award, is still operating in Halifax.

Crinkley and McKiel have experienced a positive reaction from both the town council and the citizens of Sackville, and have found that “students and market-goers are the most receptive” to the truck’s offerings. While they are content to start small in order to maintain their focus on “interesting, fresh, local, and well-prepared food,” Crinkley and McKiel have definite plans for the future. For instance, they plan to begin a foray into take-home dinners, which McKiel mentioned could be anything from “shepherd’s pie to curry,” as well as other seasonal menu changes. Although the festival season has largely come to an end for the year, the duo plan to expand their operations to include travel to various music festivals next summer, of which McKiel cited Evolve and the Harvest Jazz and Blues Festival, as potential locations. Additionally, the pair expects to offer some catering services in the near future, so as to maintain a presence in the town.

The Everyday Food Truck generally operates from Tuesday to Friday from 11:00 am until 3:00 pm for lunch, and Saturdays at the farmers’ market. Although their offerings are fresh and seasonal, the menu generally consists of tacos, burritos, and lobster poutine. The food is cooked fresh daily, and the pair make an effort to use primarily local foods, although staple Mexican ingredients, such as avocado and lime, have to be purchased elsewhere out of necessity.

Although the public opinion of food trucks has certainly shifted with the widespread establishment of gourmet food trucks, many may remain sceptical of a truck’s cleanliness, especially considering the antiquated nickname ‘roach coach.’ However, recent legislation passed throughout North America has heavily regulated food truck operations, rendering them both clean and affordable. McKiel described the daunting process of setting up the truck, which mostly involved obtaining permits and passing inspections, as a “funny bureaucratic maze.” Despite these laborious procedures, the pair were up and running this summer with assistance from Sarah Evans and Alan Barbour of the Black Duck Coffee House, Paul Henderson, and other supportive locals.

With the spectre of paperwork and inspections behind them, the Everyday Food Truck looks to be here to stay. Although McKiel is an active musician, he considers the truck, and the self-employment it entails, to be a more fulfilling way to do the work that musicians often “have to do outside of music anyway” in order to make ends meet. One would be well-advised to look for the characteristically sparse white truck on York St to try some gourmet food.