Protest is necessary for a tuition rebate 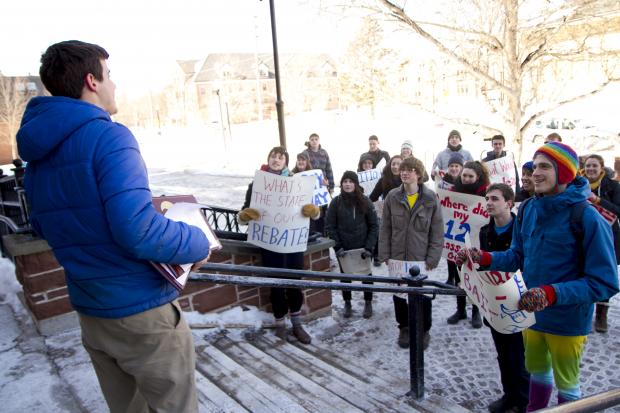 On Friday, March 7, a group of students gathered in Gracie’s for a protest demanding a tuition rebate for the events of the strike. Even before the protest had begun, the student body was torn, with some supporting the action and others condemning it.

Indeed, the protest was probably the most controversial event on campus since the strike itself. The protest taking place on Mount Allison’s open house day may have potentially damaged the school’s reputation.

However, the most common criticism I heard about the event was that it was unnecessary, since the Mount Allison Students’ Unioin (MASU) had already submitted a proposal to the university on the issue. Some have even argued that the protest was damaging, insofar as it made the university even less likely to provide a tuition rebate to us ‘troublesome’ students.

I can understand the concerns about the open house, though I have heard that interactions between protestors and prospective students were generally amicable. Furthermore, I would personally prefer that anyone considering Mt. A was made aware of the strike and its aftermath so that they at least have a complete picture of the school. Since I somehow doubt the university was advertising that whole debacle, I have no qualms with protestors taking up the responsibility of information.

The other criticisms, however, stray farther from the realm of credibility. First of all, the notion that the university would withhold a rebate simply to spite the protestors is more concerning than the actual protest. While I suppose it is possible, I’d honestly be more sickened with the administration in that case for engaging in such petty revenge politics than I would be disappointed in the protestors for ‘costing’ us a tuition rebate.

But was the protest necessary? This is where things get a little more nebulous. The MASU did submit a proposal to the university regarding a tuition rebate, specifically advocating—much as the protestors did—that the approximately $850,000 of faculty wages saved during the strike should be distributed to students.

Much like the MASU’s response during the strike itself, I found this to be a well-intentioned and beneficial step, but yet also found myself wanting something more. Their proposal struck me as a good start, but the fact that that was the extent of their visible effort was somewhat concerning.

After all, the MASU is an organization specifically designed to advocate for the interests of students. A tuition rebate would have a concrete benefit for students, and it’s something in which a large portion of the student body is quite interested. There’s even a recent, very applicable precedent set by the three-week strike at the University of New Brunswick, where students were indeed given a rebate.

In light of this, I expected the MASU to be distinctly more passionate in their push for a tuition rebate. This is something their constituency wants—something many believe they deserve—and yet the students’ union considered it sufficient to submit a modestly worded proposal and call it a day.

In this sense, I believe the protest was necessary in that it succeeded where the MASU failed: it showed that a non-trivial portion of the student body wants this tuition rebate, and that we are driven enough to fight for it. We’re not just going to submit a polite request and then demurely roll over if and when it’s rejected.

Regardless of whether we receive a rebate or not, it is important to demonstrate that the students are not simply resigning themselves to the will of the administration; many of us have passionate opinions, and we have a right to express them. Sadly, that’s something the MASU seems to have forgotten.