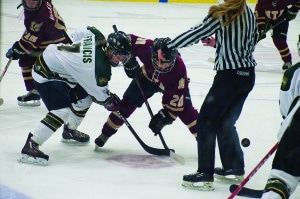 The women’s hockey Mounties continued their strong start to the second half of their season with a three-to-nothing win over the University of Moncton Aigles Bleus Saturday at home. They started the second half of last weekend with wins against UPEI and St. FX. Some standouts from the two wins last weekend were Kara Anthony with three points, Mackenzie Lalonde with two goals, and Shelby Colton with two assists. Heather Richards also added two points to extend her team lead with 11 points on the season coming into Saturday’s action. The Mounties had split the two previous encounters with the Aigles Bleus. After the loss, the Aigles Bleus are still sitting in second place in the AUS, so this was a great victory for the Mounties.

The first period was back-and-forth between the two teams, with good chances created by both teams’ forwards. Mounties goalie Keri Martin was tested early, making eight saves in the frame. The Aigles Bleus’ speed was very apparent in the first period, putting pressure on the Mounties defence group. They showed they were up to the test, keeping their forward to the outside and giving Martin good looks at the shots on goal.

The second period was much of the same, with the Mounties making some adjustments to try and counter the speed of U de M. The Mounties were rewarded for their strong play when Amanda Volcko scored midway through the second period, giving the Mounties the lead. The play started as Richards stopped the clearing attempt by U de M and showed great poise, taking the puck behind the net and finding Anthony in front. Her shot attempt was stopped but Volcko, in perfect position, snapped home the rebound for her second of the season.

In the third, the Mounties were able to put the game away with two goals. The first came from a great individual effort by defenceman Ashley Murphy, weaving her way into the Aigles Bleus zone and scoring with a backhand from a sharp angle for her first goal of the season. Kelsey Taylor added an empty net goal with 50 seconds left to seal the Mounties victory.

This was a great win for the Mounties against a team above them in the AUS standings. A great overall defensive effort consistently frustrated the Aigles Bleus forwards and, when they were able to get shots through, Martin stood tall. The 29-save shutout was Martin’s second of the season. Martin has been great all season: excepting one rough start against top-ranked Saint Mary’s, she has a .932 save percentage, which places her third in the league. As it has all season, the line of Anthony, Richards and Volcko made their presence known in the game with great possession and speed. This line has shown they are a danger to score on every shift. A key to victory was staying out of the penalty box, with U de M leading the league in powerplay goals.

As part of a back-to-back, the Mounties suited up again on Sunday, this time against the St. Thomas Tommies. After skating against the speedy Aigles Bleus, the Mounties looked a little tired but still fought hard throughout the game, unfortunately falling 3-2. The Mounties secured goals from Mackenzie Lalonde and Kelsey MacDougall—their seventh and second of the season, respectively. This loss brings the Mounties back to .500 on the season, with eight wins and eight losses and tied for fourth in the AUS standings. Overall this was a great start to the second half of the season for the Mounties, winning three out of four. They will look to continue their strong play Saturday, Jan. 23 against the Dalhousie Tigers.