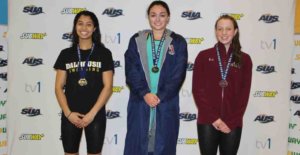 The Mount Allison varsity swim team participated in their final meet of the season this past weekend at the AUS championships held in Saint John. Several Mountie swimmers were successful in their competition and qualified for the U Sports national championships.

Olivia Feschuk is one of two Mounties who qualified for nationals.

A senior from Halifax, she has been a swimmer since she was only five-years-old. “I knew that I wanted to swim for a long time. Since I was young, I paid attention to the AUS swim meets,” she said. “I went to the AUS meets growing up and volunteered when I got older. Seeing Dal swim inspired me to swim in university.” After years of training and watching AUS meets, she has not only participated herself, but is able to say that she won.

Feschuk will be participating in the 200 metre individual medley and 200 metre backstroke at the U Sports National Championships after qualifying at the AUS meet.

Along with Feschuk, Geraint Berger will also be heading to nationals to participate in the 50 metre freestyle race. Berger is also from Halifax and has been swimming since a young age. The senior swimmer qualified for nationals last year as well and won MVP for the Mt. A swim team at last year’s Night of the Mounties.

Maddie Henry, a third-year swimmer from Toronto and one of the Mounties captains, explained the format of the AUS championships.

“Everyone swims four individual events, and there are two to three relays where we participate as a team,” she said.

Both of the men’s and women’s teams finished in fourth place this weekend, but going into the event their goal never was to win the team portion of the event. “Our team goal is cheering each other on individually instead of the AUS title,” Henry said. Dalhousie University has won the team championship for 17 straight years.

In addition to being an important meet for qualifying swimmers and recognizing team achievements, the AUS championships was also the last swimming event for seniors on the team.

James Kwan, a senior swimmer from Lethbridge, Alberta, and another captain, talked about how the final meet was emotional for himself and other seniors. Being his last university meet ever, Kwan wanted to savour the emotions of the meet while having fun with the team. “I’m very proud of what the Mounties have accomplished throughout my years here and hope for continued improvement for those continuing to U Sport Nationals and swimming next year,” he said.

With the season coming to an end, the swimmers anticipate changes to occur in their schedules because they no longer have to be at the pool every week. “Even though it’s nice when swimming is over to have extra time, it’s always nice to have that routine that keeps you on schedule and makes you do your work and not put stuff off,” Henry said.

Olivia Feschuk and Geraint Berger will travel to Toronto on Feb. 22 to participate in their respective events at the U Sports national championships.