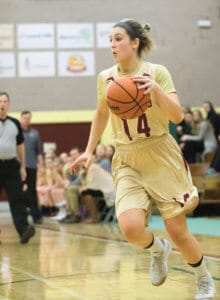 Pushing through the final weeks of the season, the team reflects on their success

Mount Allison’s women’s basketball team currently sits in third place, overall, in the the Atlantic Collegiate Athletic Association (ACAA). The team currently has 10 wins and five losses this season, giving our Mounties basketball team a total of 18 points. The Mounties have seen continual success over the past few weeks, gaining their second win in a row against Dalhousie University on Friday, Feb. 1 with a final score of 87-20.

“I would say a major contributor to our success as a team is our depth,” said head coach Ryan Chase. “We have 16 athletes who can all play and can step into various situations and contribute. A big key to our team so far this year has been our defence. We have done a really good job of taking away the strengths of our opponents and for the most part have rebounded the ball quite well, which has given other teams some problems and created some advantages for our group.”

Chase is new to the team this year. “He is very knowledgeable and I think that we have been adjusting well to his style,” said Katherine Ollerhead, a fourth-year biochemistry major who is a forward on the team. “He is very kind, helpful and incredibly supportive (even of our intramural volleyball team) which has immensely helped with the transition.”

In the team’s most recent victory, guard Bethany Warwick and forward Lauren Wentzell stood out as game leaders with 13 points each. “Keys for us this weekend will be to really try and apply a lot of pressure to the other team,” said Chase. “We don’t want to allow them to get comfortable on offence.” Helping with this goal was guard Lauren MacEachern, with 12 points, and forward Abby Miller, with 9 rebounds.

“As a first year, I look to contribute to the team in any way I can, whether it is in a practice or a game,” said Hannah Hawkes, a guard and commerce student. “My teammates have been very encouraging throughout the season. I look up to all of the seniors on our team, as they all play an extremely important role in the success of our team.”

In the team’s past victory against University of King’s College, forward Kiersten Mangold and guard Emma Hachey led the team in points: Mangold with 16 points and 13 rebounds and Hachey with 12 points. Miller also contributed 10 points overall to the game. “We’re very clear about what our goals for the season are, and that has really helped us stay focused as a team,” said Mangold, a fourth-year psychology student. “We have a lot of returning players this year so we are really comfortable with each other, which has benefited us in a lot of games.”

“We hope to continue to try and get better every week and build good habits heading into the later stages of the season,” said Chase. “Being new to the team with a lot of returning players has called for some adjustment to a new style but I think our players have been very welcoming and receptive in trying to do the things that are asked of them. We’ve had our ups and downs but we feel as though we are starting to play our best basketball of the season, which is a good sign heading into February.”

As both Mangold and Chase agreed, an important factor for the duration of the season is to keep up with the team’s current energy. “Hopefully we can keep that momentum going and continue to get better as we prepare for the home stretch,” said Chase.