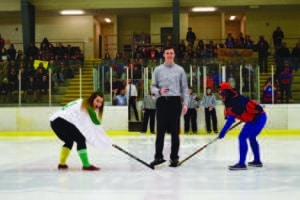 There are few times in the academic year when spirits are as high as during the week of Wampbell Cup. For the past three years, two of the university’s largest residences, Windsor and Campbell, have assembled hockey teams that face off in the rink at the Tantramar Veterans’ Memorial Civic Centre, attracting a huge crowd to revel in the rivalry.

This year, the third annual Wampbell Cup was no different both in terms of turnout and victor.

The game flew off to a rapid start, as Campbell pulled away with a 2-0 lead in the first six minutes, setting the tone for the rest of the night. The pressure on Windsor goaltender Max Landry and the rest of the team would continue for the remaining 54 minutes, with a final score of 5-2. The scene was awash with desperate cheers as throngs of students congregated in the cold arena.

“You could taste the salt coming from the Windsor crowd,” Evan Matthews, a second-year Windsor resident, said. “People were drunk, so that certainly didn’t help, and with the atmosphere being so energetic everyone was just hollering. Totally wild. Although, sometimes the crosstalk was more entertaining than the game.”

Fan participation is essential for Wampbell. House leadership organized sign creation in advance of the game and some used megaphones to rally the fans with cheers and house chants.

“To an outsider it might have looked pretty hostile, but it was really more like lighthearted fun,” Matthews said. “Everyone was enjoying themselves despite the difference of score. People were talking and chatting and keeping up the energy even until the last few seconds.”

While the occasional jeer or suspicious check riled up spectators, the players themselves took both in stride, even when Campbell led by a significant (almost dispiriting) margin. Like drunken giants, the crowd swayed to and fro with the passing of the puck and the scratching of skated feet.

James Nanos scored both of Windsor’s two goals in the game.

“Campbell had a great game. They got a few early goals and we were basically playing catch-up for the remainder of the game, but I’m glad I can say we still tried our best even at the end of the third,” he said. “I’m happy to pass the torch to the next group of [players] playing next year. Next time I hope we can shake our losing streak, since Campbell has won all three years so far.”

My own Wampbell experience was also exciting. Campbell Hall had a great showing, which was emphasized by the win, although I did eventually turn coat and sit in the Windsor stands for the last period. It was, in a word, therapeutic – there’s something about being a part of a crowd that makes you forget your immediate problems and focus on the rah-rah excitement of competition, no matter which side you’re on.

Although, booze does that too, so maybe that was it. Either way, Wampbell was fantastic, and has me (and no doubt others) anticipating next year’s stand-off.