An insight into Sackville’s alive and thriving theatre community 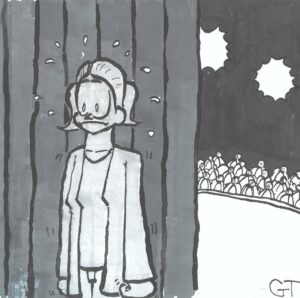 Sackville is known for its beautiful scenery, friendly residents, and lively arts scene. Within this lively arts scene, there is a beautiful, bountiful amount of local theatre that unfortunately goes unnoticed. Whether you’re looking for an enjoyable night out, a laugh with your friends, or a poignant story, there are a plethora of storytellers in this little town that perform year-round for the Tantramar community.

When it comes to local professional theatre, Live Bait Theatre is a hot spot in town. The company was founded in 1988 by Mt. A alumni and specialises in telling Atlantic Canadian stories for all audiences. The company also hosts musical artists from across Canada as well as Sackville’s New Works Festival. On top of this, they also hold theatre classes for children. This past summer, they opened their storefront space, which features a beautiful black box theatre. Alongside their long-running staff, Live Bait often hires Mt. A students as actors, technicians and instructors. In 2023, Live Bait will be putting on a multitude of theatrical productions, including The Good, the Bard and the Ugly throughout the month of January, Noumenon in mid-February, and The Last Flight to Enceladus in May. They are also hosting theatre workshops for school-aged children, beginning at the end of January. For ticket information, or to learn more about the fabulous company, you can visit their website at livebaittheatre.com, or their storefront at 14 York Street.

Looking for a laugh at an arm’s-length distance? Look no further than Mount Allison’s improv troupe, Presents: The Improv. Since their founding, Presents has been performing weekly at The Pond. The company predominantly casts Mt. A students and their comedy packs a punch, warms the heart, and provides gut-busting laughter for 18+ audiences. They also host multiple special events throughout the year including a Halloween show that includes an improvised murder-mystery and musical, a Christmas show, and a sketch comedy-based show called Friday Night Live at the end of the year. You can see the company perform every Wednesday at 9:30 at The Pond; entry is by donation.

For a community theatre that pleases audiences young and old, look no further than The Performer’s Theatre Company. Founded in Sackville, with a beautiful studio located on Fairfield Road, the company aims to “stage a variety of well written plays while also aiming for a high quality theatre experience for our patrons.” As part of that experience, they hope to “create a sense of community by bringing people together from all walks of life to enjoy good theatre, […]and foster cooperation and understanding between local arts and theatre groups and individuals, and the town of Sackville.” In 2022, they put on multiple theatre productions with community members of varying age and experience, including The 39 Steps by John Buchan (adapted for the stage by Patrick Barlow) and The Normal Heart by Larry Kramer. To learn more about the company, become a member, or buy tickets for their upcoming productions and workshops, you can visit their website at performerstheatre.com.

At the heart of Mount Allison’s campus, there is a hidden gem that is indescribably spectacular: the Motyer-Fancy Theatre. A classroom and performance venue all in one, the state-of-the-art theatre space hosts multiple shows per year that feature a cast and crew of predominantly Mt. A students. The theatre is home to Mt. A’s drama studies department and is a daily stop for the thespians of the student body who are involved in the drama studies program. The theatre also hosts touring shows from across the province, as well as guest lecturers and workshops. In 2022, the theatre put on a selection of beautifully intricate theatre pieces, including Vern Thiessen’s Bluebirds (presented by Theatre New Brunswick), Sarah DeLappe’s The Wolves (directed by Valmai Goggin), and J. B. Priestley’s An Inspector Calls (directed by Paul Del Motte and Sarah Fanning). To learn more about the theatre space and how to get involved, you can email the director of drama studies, Sarah Fanning ([email protected]) or visit Mt. A’s website.

Festival by the Marsh has been hosting beautiful indoor and outdoor theatre productions since the early 2000s. It takes place during the summer and brings Sackville’s arts scene to audiences outside of the academic year. They have put on multiple Shakespeare productions since their revival in 2021, including A Midsummer Night’s Dream (2021) and Romeo and Juliet (2022). They also host musical artists and  an artist-in-residence. To learn more about Festival by the Marsh, you can visit their website at festivalbythemarsh.ca.

One of Mt. A’s oldest and largest societies to date, Garnet and Gold, bring Mt. A and surrounding communities together to create big and beautiful musical productions. Since 1932, the volunteer-based musical theatre society has been breathing life into well-known and loved musicals, bringing fun for the whole family to Convocation Hall once a year. Previous productions put on by Garnet and Gold include The Addams Family (2018), Hello Dolly (2019), and Mary Poppins (2020). This year, after a hiatus due to the pandemic, they are thrilled to be staging a production of High School Musical, which opens on January 26. To learn more about Garnet and Gold, you can visit their Instagram, @garnetgoldmusical.

If you are looking to get to know the artistic scene that surrounds you in Sackville, look no further than any and all of these theatre companies. There is one thing that rings true within the Sackville community: the show must go on. It always has, and it always will.