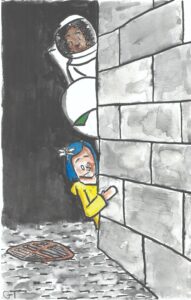 Child Maika was a reader. I was one of those kids, the annoying ones: strategically befriending my middle-school librarian to access new arrivals, backpack weighed down with as many books as it could fit. Reading has taken the backseat in more recent years. Today, I want to rediscover that passion, and have gathered a few of the sci-fi and fantasy books I have read so far this winter. My taste is varied and my judgment poor, so there is something for everyone on this list, no matter your literary interests. Enjoy!

Interestingly, two fantasy stories I tried include versions of the world that are darker. Twisted. Gallant by V. E. Schwab is the first. On its cover, an illustrated house orbits a dark reflection of itself. The story fulfills this promise: a heartbreaking gothic tale about a family and the darkness that drove them to their limits. The main character, Olivia Prior, escapes her childhood orphanage in search of her family. Her only clue? A disturbing journal from her absent mother.

I was hesitant to enjoy this novel— it could have easily flopped. Fast-produced, tropey YA novels are sometimes indistinguishable from great stories. But I enjoyed it! I ached with Olivia as she discovered the tragedy of her legacy as a Prior. Gorgeous illustrations are given new light as the story unfolds, and I raced online for fan theories after reading, hungry for more of Olivia’s story.

Something about the promise of mirror worlds calls me. The intrigue. The potential. Another recent fantasy read, Neil Gaiman’s Coraline, reminds us: be careful what you wish for. I adore Henry Selick’s 2009 film adaptation, magical but terrifying to young Maika. As a young woman, I rewatch it endlessly. Praying the book was just as good, I picked it up in late 2022 and devoured this creepy kid’s story.

Like its film version, Coraline follows 11-year-old Coraline Jones as she settles into a new, boring house. Away from her friends and with distracted parents offering no fun, Coraline is delighted to discover a tiny portal into another, fantastical version of her house and family. But everything is not as it seems, and her Other Mother and Father want more than to keep Coraline happy forever— they want to devour her.

The book is incredible. It is terrifying. Weird concepts glossed over in the movie are horrifyingly detailed and highlighted by illustrations on the page. This 100-page treat of a read may be waiting for you in the 9-to-12 section at Chapters, but I guarantee it holds up at any age.

On the other hand, I consider myself less of a science fiction nut. But a gifted copy of Andy Weir’s Artemis over the holidays may have changed my mind. You may know Weir for his debut sci-fi novel, The Martian. Artemis is Weir’s second novel, similar to the first in its realism. In this heist-turned-thriller set on the lunar colony, Artemis is informed by Weir’s own passions for relative physics and space history. This novel is engaging and smart. The main character, space-raised nobody Jazz Bashara, finds herself in way over her head when offered the chance to make a lot more money than her usual schemes of smuggling contraband. Of course, stakes raise, lives are threatened, and despite understanding very little of the science behind this fictional feat of engineering, I was entertained the whole way through.

Ironically, the next sci-fi book I read could not be more different: The Hitchhiker’s Guide to the Galaxy. Originally released in 1979, this book by Douglas Adams began as a radio drama. At its core, Hitchhiker’s Guide follows the bizarre adventures of Arthur Dent, the last man alive after planet Earth is destroyed. His friend/saviour/revealed alien, Ford Prefect (yes, named after the car line), accompanies Arthur as they are picked up by other space-travelers of varying maliciousness. Shenanigans ensue.

One could describe this novel in many words: Witty. Hilarious. Bizarre. Utterly opposite from Artemis in every aspect. Whereas Weir suspends the reader’s disbelief by drawing on real-life concepts in engineering and physics, Adams revels in the absurdity of an impossible celestial perspective. This world is far too vast for one human reader to understand. So sit back and enjoy the ride!

While these stories have made the winter pass a little quicker so far, the new year has just begun. I look forward to the wealth of stories waiting for me! I think my middle-school self would be proud.