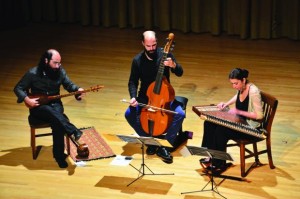 The city of Constantinople is remembered for its long history of preserving culture in literature and in music, and its inhabitants also helped to disperse and exchange ideas between the East and the West. This tradition was reignited in Montreal in 1998, when an ensemble called Constantinople was founded and served as a crossing point for musicians to explore new connections in pieces ranging from medieval manuscripts to pieces with Middle-Eastern flair.

Kiya Tabassian, Didem Basar, and Pierre-Yves Martel formed the trio that played last week at the Mount Allison conservatory. Each musician brought with them a unique experience and background which they melded together beautifully. Tabassian, originally  from Iran, has given more than 35 original performances at many of the top venues and festivals around the world. Martel, specializing in early music, as well as in improvisation, has made an esteemed international name for himself working alongside musicians representing many different cultural backgrounds.

Basar served to round out the trio. Having received training at both the I.T.U. Turkish State Conservatory and Marmara University, she has produced a myriad of recordings, CDs, and has performed in many concerts before moving to Montreal in 2007, where she played with many musicians and ensembles, not the least, Constantinople.

Even before the performers took to the stage, the audience could see their instruments: the setar (not to be confused with the sitar), a four-stringed instrument similar to the lute; the viola da gamba, an instrument commonly used in seventeenth century ensembles; and the kanun, a large trapezoidal zither commonly found in Middle Eastern ensembles. Just from looking at the instruments the audience could perceive the intermingling of musical traditions that was about to take place.

Tabassian explained that the program consisted of pieces drawn from two composers of the seventeenth century: the first, Demetrius Cantemir a composer of the Ottoman Court of Ahmet III, and the second, Marin Marais, whose compositions would have serenaded French aristocrats at the Court of Versailles. The audience waited in excitement to see how the trio would integrate the two seemingly contrasting musical traditions into one flowing performance.

Once the trio began to play, any belief that the two composers’ works would contrast one another quickly fell away. The melodies drifting between the viola da gamba, the setar, and the kanun were played in perfect harmony with one another. It was exhilarating to listen to a performance in which the French Baroque pieces moved seamlessly back and forth between the music derived from the heart of the Ottoman Empire. The transitions blended together in perfect harmony that the audience was moved effortlessly between the subtle Baroque melodies and the sultry notes hailing from the Eastern traditions.

What was most enthralling was listening to each musician and their respective instruments as they took on different roles in each piece to contribute a slightly different sound than the last. In Marais’ lively Baroque pieces, Martel and his viola da gamba shined with great intensity and vigour, which a moment later would set a subtle scene for Basar and the kanun to enter with great enthusiasm. All the while, Tabassian varied the intensity of the setar to pair smoothly with both the different instruments of the trio and the styles of the two composers.

After a brief intermission, the audience was treated to a performance of “Devr-e Raksan” and “Gozar,” pieces composed by Basar and Tabassian respectively. The music flowed, and audience could appreciate the knowing glances exchanged between the performers as they alternated between the seventeenth century compositions and their own creations.

At the end of the performance, Tabassian explained that the current performance had been the last concert of the trio’s tour, which could have lent to some of the heightened emotions and vigour displayed by the musicians. This excitement was certainly shared by the audience as they were moved by the trio’s melodies along the route connecting the French Court of Versailles and the Ottoman seat of Topkapi Palace through the intermingling of the musical traditions of the West and the East.