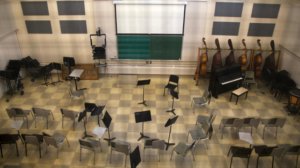 According to these musicians and psychologists, women may be more likely to be self-critical and perfectionistic

Creativity is something essential to our lives. We, as humans, need it to produce novel ideas. The ideas that we come up with change the world around us. We use creativity to share our passions with the world, and to interpret what we see. Without it, nothing worthwhile is produced, and yet we are expected to innovate and perform creatively even when flow is blocked.

As a music student, I experience a block of creative flow frequently. I rely on creative construction for both personal and academic reasons. It’s often not an option for me to avoid this type of dilemma. However, it’s not just in arts-based disciplines that this problem arises. After chatting with many peers, I have come to the understanding that this is something that happens all over campus, in every department. What is curious to me is that this problem seems to arise more often in women, at least according to what I’ve heard.

A few weeks ago, I attended the Cold Nights Festival at Thunder and Lighting where For Esmé, a Toronto-based band, was performing. Their front runner, Martha Meredith, spoke to the crowd about something called the self-objectification theory. This theory examines how women step outside of their bodies and examine themselves externally. They critique their bodies, themselves and the space that they occupy as though they were an outside observer. “This can often have really bad consequences for women especially, making it harder for them to maintain creative flow and even have orgasms, among other important things,” Meredith said.

Martha even wrote a song for the band about this theory and how it plays into her own life called I Never Learn. The lyrics perfectly paint a picture of how self-objectification can impact someone negatively: “I stare at the portrait from outside the frame / Inspecting, perfecting, so I can attain / A picture that’s perfect, a woman who’s worth it / Such a waste, such a goddamn shame.”

Barbara L. Fredrickson and Tomi-Ann Roberts, the creators of the self-objectification theory, said, “We posit that in a culture that objectifies the female body, whatever girls and women do, the potential always exists for their thoughts and actions to be interrupted by images of how their bodies appear.” What’s most frightening about this is that we don’t even realize that we’re doing it and that these negative effects take over our creative lives.

“We’re not encouraged to take risks and we grow up thinking we have to be perfect,” said Martine Jomphe, a graduating music student. “We don’t try things or take risks; we play it safe.” Because many people chronically monitor their appearance, always considering how others are viewing them, they try to play into what they think others want to see.

Self-objectification can disrupt thinking cognitively, not just artistically. Fredrickson and Roberts’ research examines women’s performances in mathematics; if a woman is told from age five that men are better at math, this can actually affect her performance in the classroom.

So all of this begs the question, “What do you do when the creative juices aren’t flowing?” There are many remedies that have proven themselves useful over the years: take a walk, cut your hair, change your perspective. All of these quick fixes can be useful, but I find what has helped me most is my awareness of the phenomenon of self-objectification. If I can see that my own thoughts and critiques are holding me back from my creative potential, then I also realize I have the power to stop it.