Garnet and Gold reaches out to community for donations 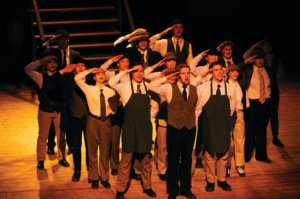 “People would be pretty rattled if [Garnet and Gold] showed up next year and said, ‘We can’t have a show,’ ” said Laura Scaravelli, the Garnet and Gold (G&G) society president and a fourth-year bachelor of music student. “That’s not on the immediate horizon but if we continue to run a deficit … it is a reality that we have to think about.”

Mount Allison’s musical theatre society Garnet and Gold has been around since 1932, making it an important feature of the school and the community. Each year, students and community members alike have shown up to the shows that G&G puts on at the end of each January. The productions attract students from across disciplines and with varying levels of theatre experience who join the cast and crew year after year.

Due to rising production costs in recent years, the society’s future has become uncertain. Currently, they are in debt.

“If we break even and then some in the next couple years we should be fine,” said Scaravelli. “But if we were to have another two, three years [like we’ve had recently] I would say that there’s very little chance that we would be able to continue having G&G, which would be a huge shame.”

In past years, the society has relied largely on the income from ticket sales to support the production, with the aid of outside fundraisers, sponsorships and society fees.

“You would be hard-pressed to find an arts organization who is able to break even on ticket sales alone,” said Scaravelli. “In the past, we raised about $15,000 on ticket sales alone and that basically covered the entire show.” With rising production costs however, the society struggles to cover their costs.

There is also the constant concern that shows could be cancelled due to winter weather, leaving the society without a large portion of their funding.

This year’s exec team decided to introduce a new way of fundraising that will hopefully calm these worries, and created an online site where the public can donate as much as they choose.

“Crowdfunding is very popular right now, and it was something that we were lacking,” said Scaravelli, who mentioned the large number of G&G alumni who would likely wish to donate. “The website is a way to streamline donations from family and friends.”

“[It would be] a huge loss if [G&G was] unable to continue in the future,” said Sydney Ford, a third-year biology honours student and G&G’s secretary-treasurer this year. “[We hope] reaching out to the community through online fundraising is going to help people understand that there are a lot of costs associated with running a full-scale production every year like we do. We really do rely on support from everyone.”

The society has already done much to limit their costs in recent years. “Costs with running a theatre production have risen exponentially and we’ve cut corners in every place we can,” explained Scaravelli. “When we sat down with our budget, realized we were in a deficit [and] that we had to make it up, immediately the question became where can we cut costs, and the honest answer was nowhere.”

Recent G&G shows have had an almost non-existent costume and prop budget. Everything is either made from hand, reused from previous years, or borrowed from members of the cast and crew. Sets are kept to a bare minimum and cast members are largely responsible for their own costumes.

Still, Scaravelli and Ford pointed to two major costs that G&G has to deal with each year.

The first is production rights to the script and music score. There used to be a number of companies that sold production rights, meaning that, depending on popularity and availability, some shows cost less and others more. However, these companies have recently been amalgamated under the American-based Musical Theatre International, a large umbrella company that has placed set prices on all scores.

“The rights cost what they do. Five years ago, we paid maybe $3,500; our rights for the show this year were around $8,000,” explained Scaravelli, who hopes that the online fundraising will be enough to cover the copyrights.

The second massive cost associated with the production is the space. The society pays an hourly fee for their time in Convocation Hall. “Generally students use school facilities for free, [but] because this building is what it is, with all the incredibly expensive technology involved in it, there has to be somebody employed by the University in the building at all times.” The cost to rent the space can be anywhere from $5,000 to $10,000 a year.

In addition, the society has to cover all the little costs that come with running a production of this size, from batteries for the mic-packs to printing programs.

“Unfortunately, I think people often take [G&G] for granted. It’s important to remember that we are essentially the only school in Eastern Canada, very possibly in [all of] Canada, that has a group like [this],” said Scaravelli. “We are entirely student-run, we are not university-funded, we do not run through any academic departments … and [we’re] open for everyone.”

“We have such a big impact on campus,” added Ford. “Even people who aren’t super involved in the arts know that the show happens every year and a lot of people come to see it … and appreciate it.”

“I think that in many ways we’re very undervalued by the University. That being said, we also see every year, year after year, a tremendous amount of support from the community and from the students,” said Scaravelli. “At the end of the day, no matter how great the fundraising page goes, our primary income is always going to be ticket sales.”

If you are interested in making a donation, the website is garnetandgold.online-compliance.com. G&G’s annual fundraiser Spectacular Spectacular takes place Friday, Jan. 17, from 10 p.m. to 12 a.m. at Ducky’s Bar. Tickets to Mary Poppins will be on sale later in the month.