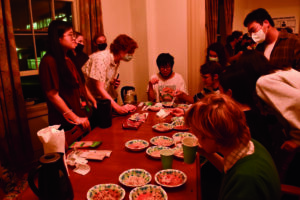 What is the most classic dorm room meal? If you are thinking what I am thinking, you probably said instant ramen. This tasty and convenient snack is a staple for many university students. If you attended the Japanese Food Summit, you were sure to learn all about it. Perhaps your knowledge even expanded to foods beyond ramen.

On October 18, the President’s Cottage was flooded with Mt. A students excited to learn about Japanese culture and cuisine. The event was hosted by GENV 1301, a course dedicated to learning Japanese foodways. The class explores “the historical origins, geographical evolution and globalization of contemporary Japanese cuisine.”

“So far we’ve learned about ramen and its origins,” says second-year French major Genevieve Landry, who is currently enrolled in the course. The event, she says, is “a way for everyone on campus to get a glimpse of what this class is, and also to see a bit of culture.” Landry was inspired to take this class because of the “attention grabbing” name and believes this event may intrigue more students to take it in the future.

“The class is super interactive, and the assignments are very hands-on,” said Miriam Ryan, a second-year geography major. The same could be said about the event. Students were eager to share their knowledge with the attendees, whether through food, discussion, or games. Through the Japanese food trivia and a ramen tasting challenge, students were able to get a taste for the class content in a playful way.

The main attraction, however, was the food. The menu for the evening included dashi, mochi, kewpie mayo, onigiri, furikake, umeboshi and sushi nori, all served by students. Additionally, the event included a tea ceremony station. A tea ceremony is described as a small, calm tea party. Tea is served in a tea bowl and is selected by the host with special consideration. In practice, this would include a brief conversation with the ceremony host and others in a calm atmosphere.

“It’s ramen and sure it might be common / but it’s a special soup and you’re special too / so you get your own bowl,” sang a former GENV 1301 student and performer for the event. Food, or in this case ramen, is very special. I think the surplus of attendees is a testament to that. Food brings people together and creates a unique opportunity for learning. Experiences like this are not often available in an academic setting.

Overall, the night was a hit. Thanks to the enthusiasm and passion of the students, everyone seemed to learn a lot, and most importantly, have fun.