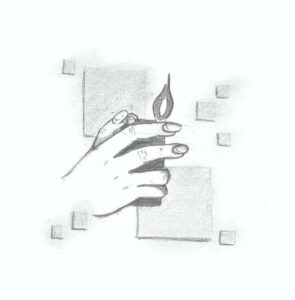 The release of this album causes backlash, but towards whom?

When the clock struck twelve on October 21, Taylor Swift released her tenth studio album, Midnights, which quickly broke the Spotify record for the most streamed album in a single day.

After Folklore and Evermore, the two albums preceding her most recent release, many Swift fans were expecting an album that would again re-invent her sound.

Swift announced the album back in August during her acceptance speech at the 2022 MTV Video Music Awards. She quickly posted an announcement on Instagram, describing the album as “a collection of music written in the middle of the night, a journey through terrors and sweet dreams.”

This post, along with the allusion to Emily Dickinson in the post, caused fans to speculate about the sound of the next album.

Many were expecting lyrics that matched the craftsmanship of Folklore and Evermore, others were expecting her to move in an entirely different direction sonically, and potentially release a rock album.

Swift is known for being secretive; she gave very few clues as to what the album would sound like. This, of course, created a lot of hype around the album.

Last Friday when the album was finally released, many fans, including myself, were shocked by the sound of the album. The album is very pop, in a style that mirrors her 2019 album Lover, but for the most part this album does not feel like a re-invention.

I think if Swift would have released a single beforehand, or maybe given more clues about the sound of the album, fans would have been less surprised.

Once I shifted my expectations, my enjoyment of the album did rise, and I have come to enjoy it very much. The songs have a cohesive sound, and work well together as an album, but there’s still some variety within them. She has some very clear pop bangers including “Karma,” “Vigilante Shit” and “Anti-Hero.” Other songs, like many of the “3AM” tracks, mirror the lyrical power found in Folklore and Evermore.

My personal favourites are “Labyrinth,” “Bejeweled” and “Karma.” “Karma” is a fun song I want to dance to, “Labyrinth” makes me want to cry (in a good way) and “Bejeweled” is pop and almost camp in a way I really enjoy.

While some Swift fans acknowledged their disappointment in the album, others were hostile towards those who gave critique.

There is a section of the Swift fan base that refuses to acknowledge that Swift ever does any wrong, which is deeply problematic. Celebrities are people, just like us, and are bound to make mistakes. Swift has an insane amount of power and influence, and critiquing her actions does not change this.

Swift’s activism often lacks intersectionality, and often comes from a place of victimization. Swift does not seem to acknowledge her privilege, but instead undersells it. In songs like “I Bet You Think About Me,” Swift claims she “grew up on a farm, no it wasn’t a mansion,” when it is well known that Swift does come from a significantly wealthy family.

Swift has also promoted and worked with other problematic creatives such as Delia Owens, author of Where the Crawdads Sing. Along with this, she stars in David O’Russell’s new movie Amsterdam, and has said nothing about the alleged abuse perpetrated by the director.

Overall, we can love and appreciate an artist without turning them into a god-like figure. Fans who critique Swift’s actions, such as the controversial use of the word “fat” in her recent “Anti-Hero” music video, should not be harassed by other fans online.