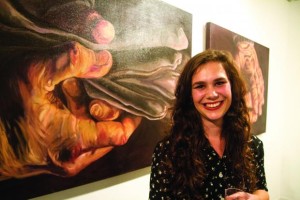 “Loss is my subject,” begins the written statement on Jillian Gooch’s new art exhibition which opened on Friday, Sept. 26 at START Gallery.

Gooch is a fourth-year fine arts student at Mount Allison who discovered her love of art in high school, and who feels that art is her strongest form of personal expression. Her newest exhibition, entitled “These are the letters I never sent,” focuses on family, growing up, and loss. In an interview, Gooch said that these are common themes in her artwork.

The exhibition’s namesake refers to a series of thirteen typewritten letters that Gooch addressed to her estranged father in the years following her parents’ divorce. The first letter came from an eight-year-old Gooch, and the last one was written at age 20.

The form of address to her father in each letter represents the evolution of her feelings towards him at each stage in her life. The first few letters call him “Daddy,” followed by “Dad,” “Father,” and eventually “Michael.” The final letter reverts back to “Dad” to signify a reconsideration and reconciliation of their relationship.

To this day, Gooch’s father has yet to see this collection of letters. “The idea was, after the show, I was going to package them and send them to him, but it’s more about when I feel ready and I feel comfortable,” Gooch said.

The letters offer indirect glimpses into Gooch’s early life and adolescence, with references to childhood pets, life events, and growing up in the suburbs of southern Ontario. When she was younger, Gooch’s mother originally gave her the idea to use unsent letters as a way of letting out negative feelings in a healthy way.

The three other series in the exhibit represent different aspects of life and loss: Gooch growing up and walking away from her past, her aunt losing the ability to work with horses due to arthritis, and a series of houses that have been significant in her life.

“My art is about connecting and being compassionate towards people,” she explained. Gooch also said that many people have approached her to share their own similar experiences, whether it was their parents’ divorce or another form of loss.

The exhibition will be on display at START Gallery until Oct. 7.